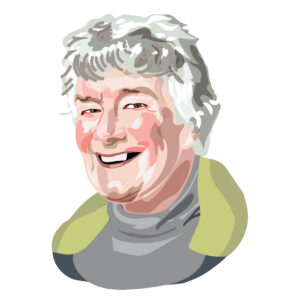 Dervla Murphy is an Irish touring cyclist and travel writer. Her first book, Full Tilt: Dunkirk to Delhi by Bicycle, followed her 1963 seven-month solo cycling journey from Ireland to India. Murphy has published 26 books. She was awarded the Royal Geographical Society’s Ness Award “for the popularisation of geography through travel literature” and the Inspiring Cyclist award from I BIKE Dublin in 2019.

Dervla Murphy was born November 28, 1931, in Lismore, County Waterford, Ireland. On her tenth birthday, she received a second-hand bicycle and an atlas. That day she vowed to ride to India one day. While growing up she took cycling trips throughout Europe and published travel articles in the Hibernia Magazine and the Irish Independent newspaper.

Murphy grew up in near poverty. It was this upbringing that she attributed to her success in traveling by bicycle. She once wrote, “The hardships and poverty of my youth had been a good apprenticeship for this form of travel. I had been brought up to understand that material possessions and physical comfort should never be confused with success, achievement, and security.” She traveled light and depended on the kindness of the local people to provide provisions and shelter.

In 1963, Murphy took her first long-distance trip from Ireland to India. Her self-funded solo trip was on an Armstrong Cadet men’s bicycle. She started to keep a journal while in Yugoslavia which later was published as her first book, Full Tilt: Dunkirk to Delhi by Bicycle. After arriving in Delhi and completing her ride, Murphy spent five months in a refugee camp in Dharamshala as a volunteer and assisted Tibetan refugees with Save the Children. After which she cycled through the Kullu Valley. These journals made up her second book, Tibetan Foothold.

Murphy traveled though countries in Europe, Africa, South America, and Asia. At age 5, her daughter Rachel started accompanying her, with a trip to Coorg in southern India. “A child’s presence emphasizes your trust in a community’s goodwill. And because children pay little attention to racial or cultural differences, junior companions rapidly demolish barriers of shyness or apprehension often raised when foreigners unexpectedly approach a remote village.” They traveled together throughout her childhood.

Rather than straight travel books, Murphy explores political topics and situations as well. In an interview with The Guardian, she noted the locations at the top of her wish list are North Korea and Iraq. At 84, when asked in an interview by Responsible Travel, what responsible tourism means to her: “It means doing enough preparatory reading to value other cultures and traditions for their own sake, not merely because they’re ‘exotic.’ And being aware of the immense environmental damage being done by the development of mass tourism. And making an effort to discover those endemic regional problems so often concealed behind the tourist industry’s glossy pictures and smooth panegyrics. Then estimating the costs and benefits to local communities when foreign cash flows in but their resources, including natural beauty, are drastically depleted by motorways and mega-hotels.”