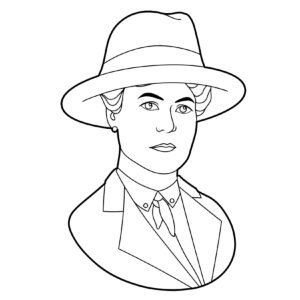 Delia “Mickie” Akeley was an American explorer and author. In 1924, through the Brooklyn Museum of Arts and Sciences, Akeley organized and led two trips to Africa and lived in the Ituri Forest with Pygmies for several months. Akeley also accompanied her husband, Carl Akeley, on expeditions to Africa starting in 1905. She authored three books: Jungle Portraits, All True! and J.T. Junior: The Biography of an African Monkey.

Delia Julia Denning Akeley was born in Beaver Dam, Wisconsin on December 5, 1869, to Patrick and Margaret Denning. She married taxidermist, biologist, and conservationist Carl Akeley in 1902. In the early 1900s, they collected specimens for museums, including the Field Museum and the American Museum of Natural History. In 1920, the Akeleys returned to America with a pet monkey called J.T. Jr. Akeley spent a lot of time caring for and studying J.T. Jr. which resulted in her book J.T. Junior: The Biography of an African Monkey.

In 1924, Akeley and her husband divorced. She decided to return to Africa on her own and focused more on the ethnography of Pygmy tribes. She wanted to study lesser-known tribes that had had little contact with the outside world through living with and observing them.

Akeley lived among the Bambute Pygmies of the Ituri forest in Zaire for a few months and collected pottery and other artifacts for museums. Her reports and writings on these tribes helped others to understand their family structure, culture, and how they lived. Akeley also lived alone for a season among the Pygmies in the Congo. Upon her return in 1930, she stated “I like the natives of Africa; I’m really pro-native, I found them friendly, intelligent, and much more understanding than we are.”

Akeley also explored other parts of Africa. She became the first Westerner to cross the previously unexplored desert between Kenya’s Tana River and Ethiopia. Akeley canoed up the Tana River from its entrance on the Indian Ocean. Her expeditions in Central Africa helped increase understanding of Zaire, Kenya, and the Congo.

Delia Julia Denning Akeley died on May 22, 1970, at the age of 100. Akeley’s expeditions in Central Africa added to the collections of the Field Museum, the American Museum of Natural History, and the Brooklyn Museum of Art. During World War I, Akeley served with American overseas forces. She was a member of the Society of Women Geographers, the Women’s Overseas Club, PEN, and was an honorary member of the Camp Fire Club of Chicago.