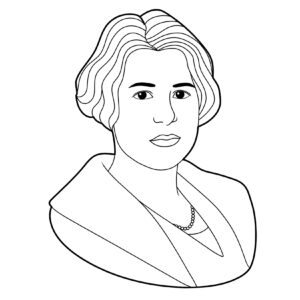 Clärenore Stinnes was a German race car driver who in 1929, at age 28, became the first person to circumnavigate the globe by car. Prior to this success, she was an accomplished race car driver. By 1927, in her first two years of racing, she had won 17 titles.

Born January 21, 1901, in Mülheim, Germany as Clara Eleonore, Stinnes was the daughter of the German industrialist Hugo Stinnes. Later known as Clärenore, she began driving laps around her father’s factory at age 15 and had her driver’s license by age 18. In her early 20s, she helped her father run a branch of the family business in South America. When he died, she returned to Berlin to begin racing cars at age 24. Winning many of her races, she quickly became well-known as one of the most successful race car drivers across Europe.

Stinnes was inspired by Charles Lindbergh’s solo crossing of the Atlantic in May 1927. She wanted to ​​drive around the world. The trip was sponsored with 100,000 Reichsmarks by the German automotive industry (Adler, Bosch and Aral). On May 25, 1927, Stinnes set out in an Adler Standard 6 car (known as Eagle 6) from Frankfurt. She was accompanied by a Swedish cameraman, Carl-Axel Söderström, two mechanics, an escort truck, and her dog, Lord.

Their route took them east across the continent through the Balkans, Siberia and the Gobi Desert to Beijing. During this time, they had to fix a broken clutch, a broken gas tank, exploded tires, and lost bolts on a rear wheel. For a time in November 1927, the Russian winter rendered them stuck. Due to these difficulties, the two mechanics abandoned the journey. Stinnes and Söderström then boarded a ship to Japan, Hawaii and Los Angeles, where they dropped off the escort truck and Lord. Then they took another ship on to South America.

In South America, they drove across Peru, Bolivia, Argentina, and over the Andes to Chile. At one point, the car sunk into quicksand and had to be pulled out by 42 men with ropes. Another time, they had to use dynamite to clear rocks away from difficult terrain impeding their progress. When at Lake Titicaca, they had to wait for a new transmission to arrive from Germany and for Söderström to recover from an illness. And while in a desert, they had to drink water from the car radiator to avoid dying of thirst. After making it through South America, they took a ship back to Los Angeles, picked up Lord, and drove through the USA to Washington D.C. and to New York.

Stinnes and Söderström married in 1930 and moved to Sweden to run a farm. The couple had three children and fostered many others.