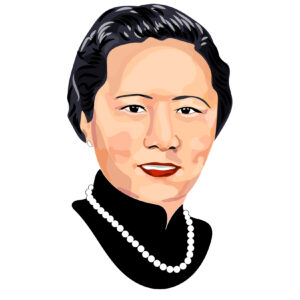 Chien-Shiung Wu was a Chinese-American experimental physicist. She was a part of the Manhattan Project during World War II and later became a professor at Columbia University. She is best known for conducting the Wu experiment where she proved that parity is not conserved during beta decay.

Chien-Shiung Wu was born in Jiangsu province, China on May 31, 1912. Wu studied mathematics and physics at National Central University from 1930 to 1934. Wu completed two years of graduate work in physics at Zhejiang University before moving to the United States to continue her studies. She enrolled at the University of California Berkley and completed her PhD in physics in June 1940. During her time at Berkley, Wu met physicist Luke Chia-Liu Yan whom she later married. Wu and Yuan moved to the East Coast of the United States, and Wu earned a faculty position at Smith College. She later accepted a position as a physics instructor at Princeton University.

In 1944, during World War II, Wu joined the Manhattan project. She was a part of the Substitute Alloy Materials Lab at Columbia University, and her work focused on radiation detectors. Wu helped fix the B Reactor at the Hanford Site when it began starting up and shutting down randomly shortly after being commissioned. She determined that neutron poisoning via xenon-135 was causing the issues. She also helped develop a way to separate uranium-235 and uranium-238 isotopes by gaseous diffusion. After the war, Wu was offered a position as an associate research professor at Columbia University. Here, she began investigating beta decay. Wu remained at Columbia for the rest of her career. She became an associate professor in 1952 and then full professor in 1958.

Wu made many contributions to the field of physics during her research career. She was the first person to experimentally demonstrate and validate Enrico Fermi’s theory of beta decay. In 1956, her experience in beta decay led her to collaborate with Tsung Dao Lee and Chen Ning Yang. She devised an experiment to prove that their law of conservation of parity was not maintained during beta decay. Wu used radioactive cobalt-60, an isotope that decays by particle emission, and cooled it to cryogenic temperatures to reduce the amount of thermal vibration of the cobalt atoms. Her results proved that identical nuclear particles do not always act similarly. These findings resulted in Lee and Yang receiving the Nobel Prize in Physics in 1957, but Wu’s contribution was not honored at this time. In 1978, she was awarded the Wolf Prize in Physics for this work.

Wu also contributed to the field of biology by making discoveries about sickle cell anemia. Wu was the first woman to serve as the president of the American Physics Society. Wu was also awarded the National Medal of Science and was the first woman to be awarded an honorary doctorate at Princeton. She retired in 1981 and became a professor emerita.

On February 16, 1997, Chien-Shiung Wu passed away at the age of 84. Wu’s nicknames include the “First Lady of Physics,” the “Chinese Madame Curie” and the “Queen of Nuclear Research.” She was the first living scientist to have an asteroid named after her (2752 Wu Chien-Shiung).