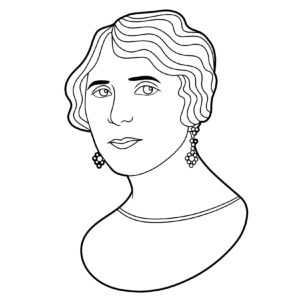 Charlotte Mansfield was an English author, poet, and traveler who is most well known for her journeys through Africa in the early 1900s. Her trip, nicknamed “Cape to Cairo,” was a planned route starting in South Africa and ending in Cairo, Egypt. Mansfield hoped to be the first woman to complete the journey through Africa solo. In 1911 she wrote a book about her journey titled “Via Rhodesia: A Journey Through Southern Africa.”

Charlotte Mansfield was born in England in 1881. Her journey through Africa was set to take off in December of 1908. In preparation, she had learned photography and how to fire a rifle. She described her clothing as functional. Her outfit consisted of a short khaki skirt, a jacket, and thorn-proof boots. She used coconut oil as mosquito repellant. She also used Muscatol insect repellent, took quinine, and always slept under a mosquito net. She was aided by locals on her trip and experienced a new mode of transport called the machilla. This was a hammock attached to a pole that she would lie in. The machilla was then carried by people on either side. The natives treated Mansfield with veneration and used drums to signal her arrival and departure from one village to the next. She was known to them as the “White Donna.”

Mansfield traveled over 16,000 miles (26,000 km), but her journey was cut short due to an epidemic of sleeping sickness. Road travel and steamboat travel were prohibited during this time. Mansfield only made it to Lake Tanganyika before reluctantly returning to South Africa. Even though she had not completed the entire journey, she had gathered enough experience to write about in her new book which received praise and recognition by publishing companies. In 1909, Mansfield married Vladimir Raffalovich in London. The couple lived in Johannesburg, South Africa.

Charlotte Mansfield passed away in 1936 in South Africa at age 55. In addition to Via Rhodesia, Mansfield also wrote multiple novels and poems. Some of her works include Torn Lace, The Girl and the Gods, Love and a Woman, Red Pearls, and Gloria – a Girl of the South African Veldt. She also compiled two books of poems titled Flowers of the Wind and Poems. In 1920, she published a World War I spy novel titled Sex and Siller and a supernatural thriller about an evil violin titled Strings. In 1916, her novel Gloria, a Girl of the South African Veldt was adapted for the screen and turned into a silent film. She was also an accomplished needlework artist and had her embroidery displayed at an exhibit in London.