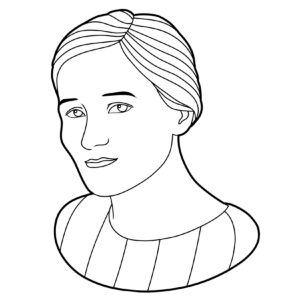 Cecilia Helena Payne-Gaposchkin was a British born American astrophysicist and astronomer. In 1925, she became the first person to earn a PhD in astronomy from Radcliffe College of Harvard University. Her doctoral thesis proposed that stars are composed primarily of hydrogen and helium, and that hydrogen was the overwhelming component of stars. Payne-Gaposchkin is acknowledged for explaining stellar spectra and the sun’s composition, and over three million observations of variable stars. Payne-Gaposchkin was the first female to attain full professorship at Harvard and the first female department chair of astronomy at Harvard.

Cecilia Payne-Gaposchkin was born on May 10, 1900, in Buckinghamshire, England. Her education started at a private school in Wendover, Buckinghamshire. At age 12, she moved to London and continued her education at St Mary’s College, Paddington. In 1919, Payne-Gaposchkin was accepted with an all-expense paid scholarship at Newnham College, Cambridge University. During this time, it was the consensus that males study mathematics and females study botany. She started her major in botany with a minor in physics, but continued with physics and dropped botany after her first year.

Payne-Gaposchkin completed her four-year education in Cambridge. However, she received no formal degree, since Cambridge did not grant degrees to females until 1948. In 1923 Payne-Gaposchkin moved to Massachusetts, USA, to continue her studies under Harlow Shapley, the Director of the Harvard College Observatory. She was the second female student in the fellowship.

Payne-Gaposchkin aimed to fuse physics with astronomy to understand the universe, and with this she introduced astrophysics to the Harvard College Observatory. Payne-Gaposchkin wrote her doctoral dissertation in two years. In 1925 she became the first person to earn a PhD in astronomy from Radcliffe College of Harvard. Her thesis, titled Stellar Atmospheres; A Contribution to the Observational Study of High Temperature in the Reversing Layers of Stars, concluded that the stars are not made of the same elements or the same composition of elements as the Earth’s crust. Her research explained that stars are overwhelmingly composed of the two lightest elements, hydrogen and helium. Her findings were first considered incorrect since they went against the common scientific agreement of that time, that earthly metals are the main elements of the sun and the stars. However, her conclusion was confirmed and astronomer Otto Struve called her work “the most brilliant PhD thesis ever written in astronomy.”

Payne-Gaposchkin continued to conduct research on stars. She made over one million observations, with her assistants, on variable stars and published the gathered information in the book The Stars of High Luminosity (1930). Her research on the evolution of stars and other exotic bodies spanned decades. She published her findings in multiple books including Variable Stars (1938) and Variable Stars and Galactic Structure (1954). In 1956 Payne-Gaposchkin became the first woman to attain full professorship at Harvard, through regular faculty promotion and the first female department chair of Astronomy. In 1966, she retired from active teaching and became an Emeritus Professor of Harvard. She continued working for twenty years, editing journals and books published by Harvard Observatory and researching at the Smithsonian Astrophysical Observatory.