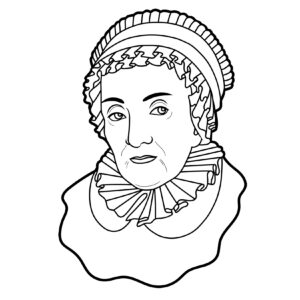 German-born Caroline Herschel became one of the 18th century’s most influential female astronomers with her discovery of comets, nebulae, and other stellar and non-stellar findings. Although Herschel’s work had largely been accredited to her brother early in her career, scientific societies began recognizing Herschel’s work as her own after the turn of the 19th century. Herschel is now credited for her many discoveries including cataloging eight comets (five of which were previously unknown); locating the elliptical dwarf galaxy Messier 110; and publishing the position of over 500 nebulae and star clusters.

Herschel was born in Hanover, Germany in 1750. At age ten, she fell victim to typhus, and because of this, she never grew taller than 4 ft 3 in. (1.29 m). Despite her physical shortcomings, Herschel started a career as a singer. After her father’s death, Herschel and her brother, William, moved to Bath, England, where both began their musical careers performing at the Octagon Chapel.

After 1778, Herschel began to lose interest in music and wanted to start focusing more on astronomy. William took an official position in astronomy under King George III and Caroline started as his assistant. Herschel quickly learned how to service large telescopes and maintain astronomical records. In 1783, Herschel made her first astronomical discovery: Messier 110, a dwarf galaxy that is a satellite of the Andromeda Galaxy.

From 1786-97, Herschel discovered eight comets. She reported her findings to Sir Joseph Banks, an English patron of natural sciences. These discoveries would lead Herschel to receiving a £50 yearly salary under King George III in 1787, albeit as compensation for her assistance to her brother’s work. This would make Herschel the first woman to receive payment for her contributions in any scientific discipline. Additionally, five of the comets discovered were published in Philosophical Transactions, making Herschel the first woman to be published in this journal.

Herschel’s brother William married in 1788, driving a wedge between her and her brother’s relationship. Herschel subsequently moved into her own lodgings and started conducting most of her research independently. For the first time, Herschel gained recognition for her work in 1799 and consequently spent a week as a guest of the royal family to entertain elite figures. Unfortunately, Caroline’s work would continue to be attributed to her brother, William. In 1802, Herschel’s star catalog was published in the Royal Society’s Philosophical Transactions of the Royal Society under William’s name.

Despite this slight, Herschel continued her work cataloging 2500 stars and nebulae in what became the New General Catalogue. This catalog was expanded upon by Caroline’s nephew, John Herschel, and later came to be known as the Index Catalogues. This catalog was used and modified by astronomers for years. This research eventually led to Herschel being awarded the Royal Astronomical Society’s Gold Medal, an achievement no other woman would be awarded again until 1996.

Later in life, Herschel was made an honorary member of the Royal Astronomical Society and the Royal Irish Academy. She passed away in 1848 at the age of 98. Herschel continued to receive recognition for her work posthumously. Asteroid 281 Lucretia and two star clusters are named in Herschel’s honor. In 1981, Herschel’s residence in Bath reopened as the Herschel Museum of Astronomy.