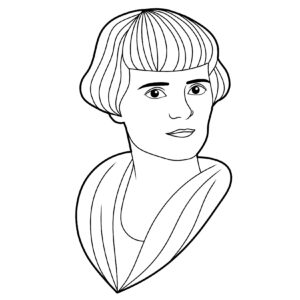 Blair Niles was an American travel writer and novelist. She explored many countries and wrote about her expeditions. She was a founding member, and the first secretary of the Society of Woman Geographers. Niles was also the first woman to visit Devil’s Island penal colony in French Guiana.

Mary Blair Rice-Niles was born on June 15, 1880, on her parent’s tobacco plantation called The Oaks. Niles lived her early years on her family’s plantation. She would often read for hours in the family library to learn about the outside world. She also spent much of her time conversing with the mostly African American help about their lives beyond the plantation. She was educated at home by her mother who also taught her siblings and the sharecroppers’ children. Niles later attended seminary school in Massachusetts before making her way to the Pratt Institute in Brooklyn, New York to study domestic science.

In 1902, Niles married William Beebe, a naturalist and explorer who was the head curator of the New York Zoological Gardens, now the Bronx Zoo. Niles assisted Beebe in scientific expeditions to Mexico, Venezuela, Trinidad, British Guiana, Europe, Egypt, Ceylon, India, Burma, Borneo, China, and Japan. The couple co-wrote two books together, Two Bird Lovers in Mexico and Our Search for Wilderness. In 1920, the couple went on an eighteen-month trip to Asia to study and collect pheasants, the Kuser-Beebe Pheasant Expedition. They traveled about 52,000 miles (83,000 km) and visited 22 countries (UK, Egypt, Ceylon, India, Sikkim, Burma, the Yunnan Province in China, the Malay States, Java, Borneo and Japan).

In 1913, Niles filed for divorce from Beebe. The split was not amicable and even though Niles played a large part in the Kuser-Beebe Pheasant Expedition, Beebe did not include her in the resulting publications. Once her divorce was finalized, Niles married an architect, Robert Niles Jr. who was an explorer and photographer. They took expeditions to Central and South America, including French Guiana. Niles is known to be the first woman to visit Devil’s Island where she researched its French penal colony. Niles focused on the life of a prisoner named René Belbenoit for her best-selling book Condemned to Devil’s Island: The Biography of an Unknown Convict, which was adapted into the Hollywood film Condemned.

Niles founded the Society of Woman Geographers in 1925 with Marguerite Harrison, Gertrude Shelby, and Gertrude Emerson. These female explorers wanted to bring together women who had ambitions and interests in exploration and research. When Niles wasn’t traveling, she lived in New York City, writing short stories for magazines and book reviews. For her, 1931 book, Strange Brother, Niles spent time with the New York LGBTQ community. While she was heterosexual, American professor and author, Susan Stryker stated that her “book Strange Brother provides an early and objective documentation of homosexual issues during the Harlem Renaissance.” In 2003, author Anthony Slide wrote that her approach to the book was like that of an anthropologist. In 1938, her book Peruvian Pageant earned Niles the City of Lima’s gold medal on the 117th anniversary of Peru. She was awarded the Constance Lindsay Skinner Medal by the Women’s National Book Association and the Booksellers’ League in 1941.

Mary Blair Rice-Niles died on April 14, 1959, from a cerebral hemorrhage in New York City. Throughout her life she authored 11 nonfiction and 7 fiction books.