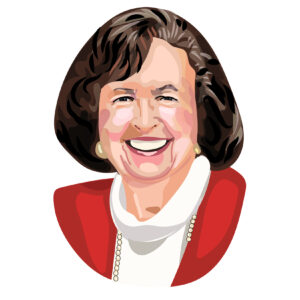 Born and raised alongside the Salmon River in Idaho, Bethine Clark Church emerged from humble beginnings to become a Democratic icon and lifelong supporter of the causes most important to her: the Environment, Education, Health care and Human Rights. A strong family background in politics and public service were the foundations for her dedication to these causes, which she felt were her responsibility to influence by using her experience, contacts and political sway.

Born in Mackay, Idaho in 1923 into one of Idaho’s most well-known political families, she was raised in Idaho Falls where her father and grandfather were mayors. Her father, Chase Clark, also served as Governor from 1941-1943 and later became a federal judge appointed by FDR. Church graduated from the University of Michigan in 1945 with a degree in Sociology, and eventually married her high school sweetheart, Frank Church, who enjoyed a long and influential tenure as an Idaho senator from 1957 to 1980.

Church was an active participant in their political life in Washington, traveling the world with Frank, campaigning with him four times for Senator and once for President in 1976. She became known as Idaho’s “Third Senator” because of her active role in politics during the time her husband served in the Senate.

Together, the couple sponsored and supported the passage of a number of important Environmental acts: The Wilderness Act; the Wild and Scenic Rivers Act; the protection of Idaho’s Hells Canyon National Recreation Area; and the Frank Church River of No Return Wilderness.

After her husband’s death from cancer in 1984, Church remained active in politics, continuing to champion her favored environmental causes, founding the 1,500 member Sawtooth Society, a nonprofit organization dedicated to preserving the Sawtooth National Recreation Area (SNRA), which was deteriorating and under threat of subdivision at the time. The society worked with Congress to appropriate almost $10 million for conservation efforts to save the SNRA. Church held many titles over the years, some of which include Co-chair of the Anne Frank Human Rights Memorial in Boise, Chairperson of Boise State’s Frank Church Endowed Chair of Public Affairs and President of the Center for Responsive Politics.

At age 80, in 2003, her autobiography A Lifelong Affair: My Passion for People and Politics, was released. She said that she wrote it so that her children and their children could learn more about her and Frank’s life in politics, their travels and their fierce dedication to public service. “I was born into politics. It’s part of me,” she told the Times-News in 2003.

Bethine Clark Church died at age 90 on December 21, 2013. In her remarks upon receiving an Honorary Doctorate Degree from Boise State University, she implored the attendees: “My message to you is to keep America’s wilderness pristine. Protect the earth. So, take up a cause you believe in, and fight the good fight. You will not win all the battles, but when you reach my age in life, you will look back with no regrets and some satisfaction that you have tried to make a difference.”