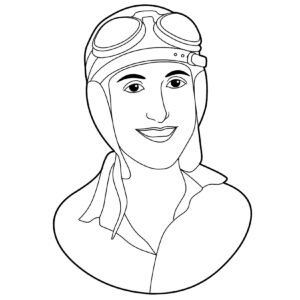 The English-born Kenyan aviatrix, adventurer, horse trainer and author Beryl Markham accomplished many achievements throughout her life. She is best known for pushing the extremes of flying by being the first person to fly solo, non-stop across the Atlantic from Britain to North America; a feat which is still celebrated today.

Markham was born in the village of Ashwell, in the county of Rutland, England, the daughter of an accomplished horse trainer, Charles Baldwin Clutterbuck. At age four, Markham moved with her father to Kenya, which was then colonial British East Africa, where the family established a horse racing farm. Markham developed her knowledge and love for horses during these childhood years, establishing herself as a trainer at the age of 17, when her father left for Peru. This early expertise would set her up for an illustrious career later in life after a significant career in exploration.

Markham was described as a noted non-conformist, pushing cultural norms in a male dominated environment being a prominent woman in her field of horse farming and exploration across Africa. After success breeding and rearing horses, Markham gained interest in aviation, as she was inspired, and later coached by Tom Campbell Black. She worked for several years as a bush pilot, spotting animals from the air and signaling their locations to safari tours. However, Markham was eager to continue her adventurous endeavors, seeking a greater aviation challenge in 1936 with her solo flight across the Atlantic.

When Markham took on the Atlantic crossing, no pilot had ever attempted a non-stop from Europe to New York, and no one had made the westward flight solo between the continents, though several had died trying on the perilous journey. On September 4th, 1936, Markham took off from Abingdon, southern England hoping to claim both records and set a precedent for future aviation around the world. Markham set off in her Vega Gull, named The Messenger, and after 20 hours of flying the craft suffered fuel starvation due to icing of the fuel tank vents at altitude, and she crash-landed at Baleine Cove on Cape Breton Island, Nova Scotia, Canada. Despite a less than elegant landing and a rough journey, Markham had completed the world’s first westward Atlantic crossing as a pioneer of aviation.

Markham then went on to chronicle her many adventures in her memoir, West with the Night, published in 1942 which originally sold modestly. However, it was then rediscovered in the 1980s where it became a best seller and appeared on New York Times best-seller list of hardcover fiction.

After living for over a decade in the United States, Markham moved back to Kenya in 1952, becoming the most successful horse trainer in the country for a period, renowned for producing winning racehorses well into her 80s. Markham passed away in 1986, leaving a legacy of exploration firsts and successful adventurous business endeavors. In her honor, the International Astronomical Union has named an impact crater on the planet Venus after her.