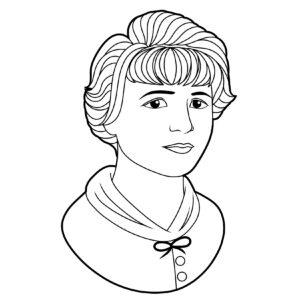 Berthe Cabra was a Belgian citizen who became the first woman to travel across Central Africa from east to west in 1905. Cabra and her husband, Commander Alphonse Cabra, were also the first Europeans to travel across Africa. When Cabra returned to Europe, she was hailed as a hero and received an immense amount of press from Belgian and foreign news agencies. For her journey, Cabra was awarded several honors. Her final achievement was in 1932 when Cabra founded a scholarship at the Colonial University of Antwerp.

In 1864, Berthe Gheude de Contreras Cabra was born in Brussels, Belgium to parents Jean-Martin Gheude and d’Euphrosyne d’Alcantara de Contreras. She married Alphonse Cabra in 1901. Alphonse Cabra had a career in the Belgian military and in 1896 his career took a turn when he was assigned to lead a scientific mission in the province of Boma in the independent state of Congo. Berthe accompanied Alphonse in 1903 as he was on a mission to delineate the border with France in the Manyanga region in Bas-Congo, now known as Kongo Central. During this time, Berthe interacted with the indigenous populations and became familiar with African living conditions.

Alphonse’s work continued in the Belgian territory of Congo for several years until 1905 when he was tasked by King Leopold II with delineating the line between the Belgian Congo and the French and German colonies. Although initially reluctant, Leopold II allowed Berthe Cabra to go with him on this mission at her insistence.

At the time, the Scramble for Africa was ongoing and many European countries were racing to declare the land for their own colonies. Belgium’s only in-land colony at the time was in today’s Democratic Republic of Congo, although they would declare Rwanda a Belgian colony in 1919 after Germany’s defeat in World War I.

The couple left Naples in April 1905. Their journey started in Dar es Salaam, which was the capital of German East Africa in modern Tanzania. After visiting Zanzibar, Berthe and her husband traveled to Mombasa in modern-day Kenya which was the true start of their mission. From Mombasa, the couple went to Uvira, which is a city in today’s Democratic Republic of Congo and is close to the border of Rwanda and Burundi and on the northern coast of Lake Tanganyika. At the time, Rwanda and Burundi were part of German East Africa, so the couple headquartered at Uvira for six months to work on delineating the border between these two colonies and Belgian Congo.

After Uvira, the couple and their caravan traveled to Boma via the Congo River which marked the end of their mission. Boma is a city in the Democratic Republic of Congo that lies very close to the western coast of Africa. When the mission was completed, Alphonse was called back to Uvira so Berthe returned to Europe alone, where she was welcomed as a hero. Several of the artifacts that the Cabras kept from the journey are now in the Royal Museum of Central Africa. Berthe was awarded the Chevalier of the Order of the Crown in 1925, the Knight of the Order of Leopold in 1926, and the Congo Commemorative Medal in 1929. She founded a scholarship of 50,000 francs at the Colonial University of Antwerp in 1932.