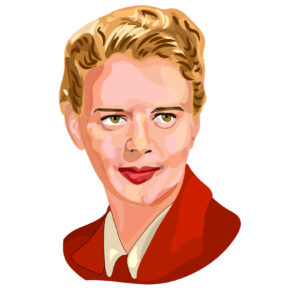 Beatrice Hicks was an American engineer. In 1950, she founded and was the first president of the Society of Women Engineers. Hicks invented the Gas Density Sensor (patented in 1962), which the United States Space Program went on to use for several missions, including Apollo. Throughout her career, she earned numerous honorable doctorates and awards. She was inducted into the National Women’s Hall of Fame in 2002, and the National Inventors Hall of Fame in 2017.

Beatrice Alice Hicks was born on January 2, 1919, in Orange, New Jersey. The Empire State Building and the George Washington Bridge inspired Hicks when she was 13 years old. She told her father, William Lux Hicks (a chemical engineer and founder) of Newark Controls Company, a metalworking firm, that she too would be an engineer. In 1935, she graduated from Orange High School and enrolled in Newark College of Engineering (now New Jersey Institute of Technology). In 1939, she received her BS degree in chemical engineering as one of two women in a class of 900. She stayed on as a research assistant for three years.

In 1942, Hicks went on to become the first female engineer employed by Western Electric, where she worked on developing long-distance phone technology. Hicks invented a crystal oscillator, which generated radio frequencies, which helped advance aircraft communications. Her father William passed away in 1946, which left her to take on the roles of Vice President and Chief Engineer of his company, Newark Controls.

In 1948, Hicks married a fellow engineer, Rodney Chipp. A year later in 1949, she received a Master’s degree in physics from Stevens Institute of Technology. In 1950, Hicks formed the Society of Women Engineers, with the goal of advancing women engineers in the workforce, and served as President for two years.

Throughout her career, Hicks achieved numerous milestones, awards, and honorable doctorates. In 1952, she was named as Mademoiselle magazine’s Outstanding Woman of the Year in Business. In 1955, she became the President of Newark Controls Company after acquiring her uncle’s stock in the company. In 1958, she was awarded an honorary Doctorate by Hobart and William Smith College. In 1962, Hicks filed the U.S. Patent for the Gas Density Sensor, which segued her being awarded the Society of Women Engineers Achievement in 1963. In 1965, Hicks was the first woman to be awarded an honorary Doctorate by Rensselaer Polytechnic Institute (RPI). In 1978, Hicks was awarded an honorary Doctorate by Stevens Institute of Technology and Worcester Polytechnic Institute, and that same year was elected to the National Academy of Engineering.

Beatrice Alice Hicks died on October 21, 1979, at age 60 in Princeton, New Jersey. In 2002 Beatrice was inducted into the National Women’s Hall of Fame, and in 2017 she was inducted into the National Inventors Hall of Fame. The Society of Women Engineers, that she co-founded, is still in operation today and has over 40,000 members. Their mission is to “Empower women to achieve full potential in careers as engineers and leaders, expand the image of the engineering and technology professions as a positive force in improving the quality of life, and demonstrate the value of diversity and inclusion.”