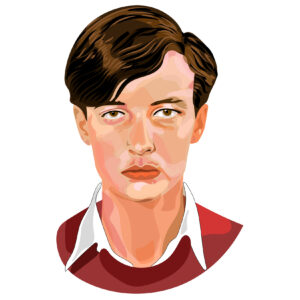 Annemarie Schwarzenbach was a Swiss novelist, journalist, and photographer. She was responsible for 19 major works of writing during her lifetime, including coverage of the early events of World War II. Her work ranged from photographs of the rise of Fascism in Europe, to travelogues, to critiques of Swiss neutrality, to novels. She wrote in German and most of her work is not available in English.  To some she is celebrated for her androgyny and refusing to be defined by gender, others for her anti-fascist views, and others as an early LGBT heroine.

Schwarzenbach was born in Zürich, Switzerland in 1908 but grew up in Horgen. She studied in Zürich and Paris, earning her doctorate in history at the University of Zürich at the age of 23, however even from a very young age she yearned to be a writer. She started writing while still a student, and shortly after completing her studies, she published her first novella Freunde um Bernhard (Bernhard’s Circle).

Schwarzenbach’s twenties were spent in Berlin embracing the Bohemian cultural scene. However, this was quickly cut short due to the Nazi takeover in 1933. Despite pressure from her family to submit to Nazi rule, Schwarzenbach was a committed anti-fascist and her circle included Jewish friends and political refugees from Germany. Later that year, she helped her friend, Klaus Mann, finance Die Sammlung (The Collection), a monthly literary magazine primarily associated with German writers who fled from Nazi rule.

In 1935, in Persia, Schwarzenbach married Achille-Claude Clarac, a French diplomat who was also homosexual. This allowed her to obtain a French diplomatic passport and to travel without restrictions.

In 1936, Schwarzenbach became interested in the career of Lorenz Saladin, a Swiss mountain-climber and photographer who had scaled some of the most difficult peaks in the world. When in Moscow, she acquired Saladin’s films and diary and she would go on to write her most successful book, Lorenz Saladin: Ein Leben für die Berge (A Life for the Mountains); as well as Tod in Persien (Death in Persia), which was not published until 1998.

In 1937 and 1938, her photographs documented the rise of fascism in Europe, visiting Austria and Czechoslovakia. After this brief stint in Europe, she would take her first trip to the U.S., traveling into the Deep South and to the coal basins of the industrial areas near to Pittsburgh. Here her photographs documented the lives of the poorer families and the working-class struggle.

In 1939, in an attempt to escape the growing tensions in Europe, she embarked on an overland trip to Afghanistan with the ethnologist Ella Maillart, setting off from Geneva in a small Ford car traveling via Istanbul, Trabzon, and Teheran to Kabul. She arrived as World War II began, leaving her stranded far from home. Schwarzenbach would make her way back to Europe and then on to the U.S. where she met her old friends, the Manns, and worked with them on a committee for helping refugees from Europe.

In March 1941, Schwarzenbach arrived back in Switzerland, but soon traveled as an accredited journalist to the Free French Forces in the Belgian Congo. This was the last major work Schwarzenbach would undertake.

Annemarie Schwarzenbach died on November 15, 1942, due to a fall from her bicycle in the Swiss town of Sils im Engadin, where she sustained a serious head injury. Despite many of her diaries, journals and photographs being destroyed by her mother, a good deal of her work remains. In the late 1980s, when Switzerland was re-evaluating its World War II history, her work started to resurface. Between 1933 and 1942, Schwarzenbach produced 365 articles and 50 photo-reports for newspapers and magazines.