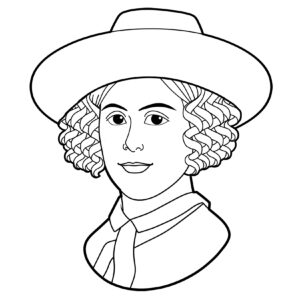 Alexandrine Petronella Francina Tinné was a Dutch explorer and the first European woman to attempt to cross the Sahara Desert. Tinné led an expedition to the Bahr-el-Ghazal region of Sudan to explore and catalogue its flora and fauna. The Tinnean expedition led to the publication of the Plantae Tinnéennes in 1869, a book that lists the discovered plants and flowers alongside descriptions and twenty-five hand-painted plates and illustrations. During her expeditions, Tinné gathered information about culture and customs and collected artifacts and clothing from a part of Africa that was barely known to the outside world. Tinné is recognized as one of the most prominent explorers in Africa during the Victorian era.

Alexandrine Tinné was born in 1835 in The Hague, Netherlands, the daughter of Dutch merchant Philip Frederik Tinné and his second wife, Baroness Henriette van Capellen. Her mother was the daughter of a Dutch Vice-Admiral and a lady-in-waiting to Queen Sofia. The Tinné family’s wealth and status afforded them the opportunity to travel often. Young Tinné participated in a Grand Tour of Europe upon her father’s passing in 1845. A Grand Tour was a journey many young, wealthy nobles in the Victorian era undertook where they traveled through Europe to showcase their wealth, independence, and cultural artifacts brought back as souvenirs.

Tinné and her mother first traveled to Africa in the 1850s. They embarked from Cairo down the Nile River to Luxor in 1856, then trekked across the desert to reach the Red Sea. A second journey followed in 1857 where the baroness and Tinné attempted to follow the Nile to Sudan but were not successful. As a result, mother and daughter returned to the Netherlands to plan a third, more ambitious voyage.

On this third voyage, Tinné wanted to travel from Cairo to Khartoum, a city located at the joining of the Nile’s two major tributaries. On January 9, 1862, Tinné, together with her mother, her aunt, four servants, and a host of other assistants and guides left Cairo in three large boats. They reached Khartoum on April 1, 1862. Tinné then wanted to explore the Bahr-el-Ghazal region; she hoped this tributary would prove to be the elusive source of the Nile, a common goal among African explorers at the time.

Along with her family, Tinné met up with an ornithologist, Theodor von Heuglin, and a botanist, Dr. Hermann Steudner. The presence of these scientists lent credibility and legitimacy to the expedition in the eyes of other explorers at the time. As they traveled, Tinné pressed, preserved, and drew any biological specimens that she came across. These specimens were the ones that formed the basis of her Plantae Tinnéennes. On this trip, however, Tinné lost her mother, her aunt, and her childhood maids due to illness. Despite this, she remained and continued to travel in Africa and on the Mediterranean.

In the late 1860s, Tinné tried to reach the Touaregs, a nomadic people who lived in the Sahara. In 1869, she attempted to cross the Sahara with a caravan and guides, something no other European woman had tried before. On August 1, 1869, Tinné died in an attempt to mediate a conflict between members of her party. She had been on her way to visit with a Touareg chieftain; it is posited that her death may have been in relation to internal conflict among the Touareg people or staged by Touaregs who claimed to have been sent by their chief to help her.

Alexandrine Petronella Francina Tinné died on August 1, 1869, at age 33. Tinné’s ethnographic collection from her 1863-64 expedition of the Bahr-el-Ghazal region can be seen at the World Museum in Liverpool, England. There are also papers, photographs, and artifacts at the Royal Archives and Library in The Hague as well as the Tinné Family Archives in England, the Von Heuglin Archive, Linden Museum, Stuttgart, and the Collection Archives, Liverpool World Museum.