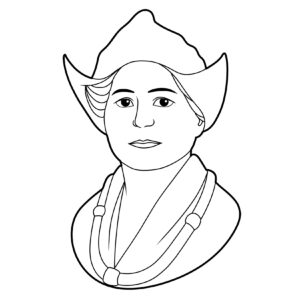 Alexandra David-Néel was a French writer, explorer, and Buddhist scholar. In 1924, at age 55, she was the first Western woman to enter the Tibetan city of Lhasa, when Tibet’s borders were closed to foreigners. She published more than 30 books about Eastern philosophy, religion, and her travels. Her teachings influenced Beat poets like Alan Ginsberg and Jack Kerouac, and proponents of Eastern philosophy in the Western world, Alan Watts and Ram Dass.

Louise Eugénie Alexandrine Marie David was born on October 24, 1868, in Paris, France. She became interested in Asia from her trips to the Guimet Museum in Paris. At the age of 18, with a few possessions tied to her bicycle handlebars, she embarked for Spain before traveling to London, where she became involved with the Theosophical Society and began her studies of Chinese and Indian philosophy and religion.

David-Néel studied English, Sanskrit, and Tibetan. In 1890, after receiving an inheritance from her godmother, she traveled to India to further pursue her Sanskrit language and Eastern philosophy studies. After two years, she returned to Europe and began publishing articles about her studies and travels.

At age 25, David-Néel enrolled in the Royal Conservatory of Brussels and studied singing and piano. After graduation, she worked at the Opera Company of Hanoi and then in 1900, she joined a company in Tunis. In 1904, at age 36, she married Phillipe Néel, a railroad engineer whom she met in Tunisia. They lived together for 11 years before David-Néel spent 14 years traveling in Asia. During her travels, they kept up regular written correspondence.

David-Néel started her trip on August 12, 1911. Her first destination was the Hindu holy city of Benares, India. She met numerous people, including the Maharajah of Sikkim, the Gomchen (Great Meditator) of Lachen, and the 13th Dalai Lama. In May 1912, David-Néel went to Lachen and became a student of the Buddhist monk, Gomchen of Lachen. She spent two years living in an anchorite cave at 12,000 ft (3,600 m) practicing Tibetan yoga and meditation. Here she met a 14-year-old monk, Aphur Yongden, whom she later adopted.

From 1913 through 1949, Tibet’s borders were closed to foreigners due to political unrest with China and Great Britain, who were vying for control of the region. In 1916, David-Néel entered the country without permission for the first time. She met the Pachen Lama at the Tashilhunpo Monastery. He welcomed her and gave her the honorary titles of Lama and doctor of Buddhism. After traveling through Tibet for several months, David-Néel received an expulsion notice from the colonial British authorities.

As returning to Europe during World War I was impossible, in 1917 David-Néel traveled through Japan, Korea, China, and Mongolia to learn about Zen Buddhism. From 1918-1921, she and Yongden lived at the Kumbum Monastery in Tibet, where she translated the Prajnaparamita text. In 1924, when she was 56 years old, David-Néel and Yongden embarked on the now well-known trip to enter Lhasa in disguise, as a Tibetan monk and his aging mother or servant. They spent two months in the city and the surrounding monasteries.

David-Néel returned to France in 1925. She and Yongden moved to Provence, where she devoted her time to lecturing and writing books about her travels and studies. David-Néel was awarded the Gold Medal of the Geographical Society of France and named a chevalier of the French Legion of Honor. She published her most well-known works, My Journey To Lhasa (1927) and Magicians and Mystics in Tibet (1929).

In 1937, David-Néel returned to China to study ancient Taoism. The following year, she and Yongden returned to the Tibetan village of Tachienlu, where they lived for the next five years. They traveled to India in 1945 before returning to Europe.

Upon her return to France in 1946, she resumed writing and lecturing. Yongden, who had been her companion for the past 43 years, passed away unexpectedly of kidney failure on October 7, 1955. In June 1959, she hired Marie-Madeleine Peyronnet as her secretary, and she was David-Néel’s companion until her death.

Alexandra David-Néel died on September 8, 1969, at age 100. According to her wishes, Peyronnet scattered her ashes in the Ganges River along with those of her adopted son. Posthumously David-Néel has been recognized in documentaries, TV, and through expeditions. Her home is now a museum, Maison Alexandra David-Néel, in Digne-les-Bains, France.