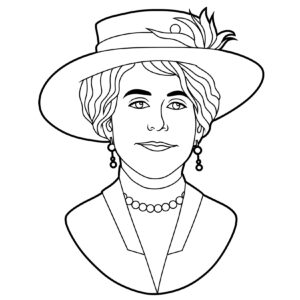 Aimée Crocker, born Amy Isabella Crocker, was an American author, world traveler, Bohemian, and princess. She was dubbed “The Most Fascinating Woman of Her Age” by The Philadelphia Inquirer in the late 1930s. While she was known for her cultural exploration of the Far East, she was also known for her extravagant parties, eccentric lifestyle, and challenging the conventional norms of her era.

Crocker was born on December 5, 1864, in Sacramento California. Her parents, Judge Edwin B. Crocker and Margaret, were activists, abolitionists, and philanthropists of extravagant wealth. In 1875, at the age of ten, Crocker inherited $10 million when her father died; a sum that would be equivalent to roughly $230 million today. Five years later, her mother sent her to a finishing school in Dresden, Germany, in the hopes that it would soften her forceful personality.

In 1883 Crocker married her first of at least five recorded husbands, Porter Ashe. Shortly after the birth of their daughter, Alma, the marriage ended in divorce and Ashe was eventually awarded custody of their daughter. Afterwards, Crocker set out to explore the world and began by visiting an old acquaintance, King Kalākaua, and toured the Sandwich Islands, now Hawaii. There she immersed herself in the local culture, rode in horseback races, wore the local dress, danced hula, and befriended both a hypnotist and the King himself. King Kalākaua gave Crocker an official title and Hawaiian name: Princess Palaikalani, which means “Bliss of Heaven.”

In 1888 Crocker embarked on explorations in “the Orient” for over six years with Commodore Henry Mansfield Gilling, whom she would take as her second husband in 1889. She visited Tokyo, Hong Kong, and Shanghai, lived with a Japanese baron and a Chinese feudal warlord, and indulged in unique cultural experiences. She sailed with a Bornean prince in Indonesia, and explored the jungle before she stumbled upon a Dutch outpost. Crocker then began to explore cities in India such as Bombay (Mumbai) and Poona (Pune) in search of answers to her exploratory quest.

In 1895, during Crocker’s last visit to Hawaii, Queen Lili’uokalani’s opposition discovered plans for a constitution that would have restored power to the monarchy and voting rights to disenfranchised native Hawaiians and Asians. After a bloody revolt and several months of house arrest, Queen Lili’uokalani formally abdicated the throne to prevent any more bloodshed. As a supporter of the throne, Crocker provided money to the royalist revolutionaries and a large vessel of fruits and vegetables for the Queen during her confinement. The Hawaiian newspaper Ka Leo o ka Lahui described Amy Crocker as one of the most generous American women who ever visited Hawaii.

Crocker met her third husband, songwriter Jackson Gouraud, at a Buddhist colony that she organized in Manhattan. Together they adopted three children, lived in two luxurious homes in Manhattan and on Long Island, and attended lavish parties, plays, and gatherings. In 1910, Gouraud died and Crocker changed her name from “Amy” to “Aimée,” and published a book of short stories about her time living and traveling in the Far East, Moon Madness and Other Fantasies.

Crocker and her children moved to Paris, where she lived for the next 27 years. She married two more times, both ending in divorce. In 1936, she published her autobiography, And I’d Do it Again: The Extraordinary Adventures of an Edwardian Heiress.

Aimée Isabella Crocker died on February 7, 1941, in New York City, NY at age 78. Dubbed “The Queen of Bohemia” and “The Most Fascinating Woman of Her Age,” Crocker was an unapologetic Bohemian and cultural explorer who actively thwarted conventional expectations for women and crossed class boundaries.