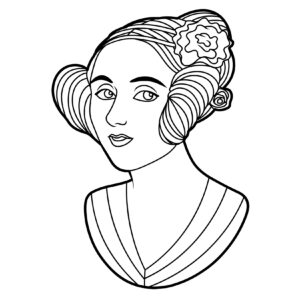 Augusta Lovelace was an English mathematician and writer. She is often regarded as the first person to realize the potential of computers. In 1843, she wrote, “The Analytical Engine weaves algebraic patterns just as the Jacquard loom weaves flowers and leaves. The machine is, in fact, the mechanical and material representation of analysis.” “…the engine may be described as being the material expression of any indefinite function of any degree of generality and complexity.”

Augusta Ada Gordon was born on December 10, 1815, in London, England to author Lord George Gordon Byron and Lady Anne Isabella Milbanke Byron. Lord Byron left Lovelace’s mother a few days after Lovelace was born and she never saw her father again; he died when she was 8 years old. Lovelace’s mother ensured that she was educated in science, logic, and mathematics. She enjoyed machines, boats, and new inventions.

In 1833, Lovelace’s mentor, Mary Somerville, astronomer and mathematician, introduced her to Charles Babbage, a mathematics professor and polymath. Lovelace and Babbage became lifelong friends and collaborators. In 1834, at the age of 19, Lovelace married William King. They had three children. When her husband became Earl of Lovelace, she officially became Lady Ada King, Countess of Lovelace and known as Lady Ada Lovelace.

In 1822, Babbage worked on what he called the “Difference Engine,” which was designed to calculate a series of values automatically. He did not complete the creation of this machine, but turned instead to design the “Analytical Engine,” a device that would combine his earlier Difference Engine and a punch card engine. Lovelace became fascinated with the Analytical Engine. Due to her understanding of the Analytical Engine, Babbage asked her to expand on an article written in French by the Italian mathematician Luigi Menabrea, with her own notes.

Lovelace’s translation resulted in three times the original content of the article. She supplied her own ideas for “programs” and uses for the machine. Babbage had come up with other programs for the Analytical Engine, but Lovelace’s were the most complete and elaborate. Lovelace understood that the Analytical Engine could go beyond numbers and act upon symbols, including music. This concept set the stage for the general-purpose computer. The Analytical Engine was never built. Her contributions were not truly understood until after her death. Lovelace’s notes were originally published in 1843, and republished in B.V. Bowden’s 1953 book “Faster Than Thought: A Symposium on Digital Computing Machines.”

Ada Lovelace died of cancer in 1852, at the age of 36. Her documents were some of the key source material that inspired Alan Turing to work on the modern computer. Posthumously, there are several awards in her honor and the computer language, Ada, was named after her. Since 2009, the second Tuesday of October, is celebrated annually as Ada Lovelace Day to raise the profile of women in STEM.