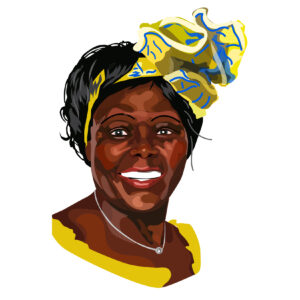 Awarded the Nobel Peace Prize in 2004, Wangari Maathai spent her life fighting for and promoting democracy and peace, sustainable development, and the empowerment of women. In her lifetime, Dr. Wangari Maathai authored four books and numerous scientific publications. She is the recipient of 15 honorary degrees in science, law, humane letters, and public service, and 50+ awards and recognitions, including the 2004 Nobel Peace Prize.

Wangari Maathai was born on April 1, 1940, Ihithe, Nyeri, a village in Kenya. Although her father worked as a tenant farmer in the Rift Valley, she lived in Ihithe with her mother and brothers to attend school. Maathai joined St. Cecilia’s Intermediate Primary School at the age of 11, where she gained English fluency. Through the Kennedy Airlift program, Wangari became one of 300 Africans chosen to study in the United States of America in September 1960. Wangari Maathai graduated from Mount St. Scholastica (Benedictine College) with a bachelor’s degree in biology in 1964 before pursuing graduate studies in biological sciences at the University of Pittsburgh. Returning to Africa, she was denied research positions due to gender and tribal bias. In 1967, she traveled to Germany for doctoral studies and completed her PhD at the University of Nairobi in 1971, becoming the first East African woman to do so.

In addition to lecturing at the University, Dr. Maathai became involved with the Kenya Red Cross Society, the Kenya Association of University Women, the Environment Liaison Center, and the National Council of Women in Kenya during the 1970s. In 1974, she founded Envirocare Ltd. which provided jobs in the process of environmental restoration. The project led to Dr. Maathai’s involvement with the United Nations and the eventual formation of The Green Belt Movement in 1977. Maathai encouraged Kenyan women to plant nurseries across the country, paying small stipends for replantable seeds. With help from the UNEP, in 1987, the Green Belt Movement became the Pan African Green Belt Network, spanning 15 African countries.

Dr. Maathai advocated and protested for fair democracy in Kenya, running for parliamentary seats and national councils. She led marches, wrote letters of protest, and attended hunger strikes on multiple occasions leading to assassination attempts and her arrests. Although applauded internationally for her work, the Kenyan government strongly opposed Dr. Maathai and her work. After teaching at Yale University in 2002, Dr. Maathai returned to Kenya, campaigning and winning the parliamentary seat with 98% of the vote. Over the next decade, Dr. Maathai served as president of the African Union’s Economic, Social, and Cultural Council, spearheaded the United Nation’s Billion Tree Campaign, and founded the Nobel Women’s Initiative. She was awarded the Nobel Peace prize in 2004 for her “contribution to sustainable development, democracy, and peace.”

Due to complications arising from ovarian cancer, Dr. Wangari Maathai died on September 25, 2011, at age 71. She was laid to rest at the Wangari Maathai Institute for Peace and Environmental Studies in Nairobi. Beginning in 2012, the Collaborative Partnership on Forests (CPF) launched the inaugural Wangari Maathai Forest Champion Award. In honor of her dedication to the environment, Wangari Gardens opened in Washington D.C. in 2012, as did Wangari Maathai Trees and Garden at the University of Pittsburgh’s Cathedral of Learning in 2013. A statue and mural immortalize her at her alma mater, Mount St. Scholastica’s Kansas campus. Her legacy lives in her words “We cannot tire or give up. We owe it to the present and future generations of all species to rise up and walk!”