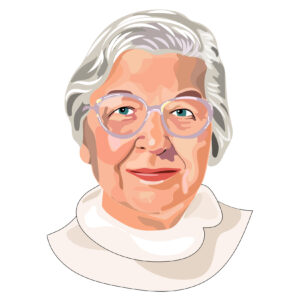 Stephanie Kwolek was an American chemist and inventor of Kevlar. Kevlar is used in more than 200 products, including spacecraft and bulletproof vests. Kwolek had a 40-year career at DuPont and filed over a dozen patents. Her contributions to scientific innovation led to increased safety and protection for thousands of people in law enforcement and civil service. She was honored in the National Inventors Hall of Fame and received the National Medal of Technology.

Stephanie Louise Kwolek was born on July 31, 1923, in New Kensington, Pennsylvania. She became interested in science while spending time with her father who was a naturalist, and in designing products by seeing her mother work as a seamstress. In 1946, Kwolek earned her bachelor’s in chemistry at Margaret Morrison Carnegie College of the Carnegie Institute of Technology (now Carnegie-Mellon University). Her goal was to attend medical school to become a doctor, and was preparing financially by working in the scientific field temporarily after graduation.

Kwolek joined DuPont in 1946 as a research chemist in their textile fabrics laboratory. For six years, she was guided by the mentorship of William Hale Charch in Buffalo, New York. In 1950, she was transferred to the new Textile Fibers Pioneering Research Laboratory at DuPont’s Experimental Station in Wilmington, Delaware. Kwolek began researching low temperature processes for the preparation of condensation polymers. She was responsible for developing simple processes to make this new class of synthetic fibers with high performance properties at low temperatures.

DuPont was looking for a replacement for the steel used in tires. In anticipation of a fuel shortage, they were looking for something lighter to improve gas mileage. Kwolek’s lab experiments involved making aromatic polyamides that had high molecular weight. She dissolved the polyamides in different solvent systems, and spun the polymer solutions into fibers. She noticed that polyamide molecules aligned in parallel to make liquid crystalline polymers with the required properties. Although the solution looked bad in that it was cloudy and non-viscous, she spun it anyway. The fibers she made, tested to serve well for extreme applications that required high strength, tear-resistance, stiffness, and heat-resistance. The most well-known fiber product she discovered and helped bring to the commercial market is Kevlar. It has comparable properties to steel while being lightweight. Today, Kevlar is incorporated into hundreds of products, which include bulletproof vests, fiber optic cables, protective gloves, helmets, ropes, tires, canoes, and spacecrafts.

In 1980, Kwolek won the American Chemical Society (ACS) Award for Creative Invention. In one of her articles for the ACS she described the Nylon Rope Trick, which is a common science experiment in classrooms to this day. It involves making nylon, a strong synthetic polymer, simply, in a beaker at room temperature. Her research collaborations with other chemists on high performing polymers led to more patents in 1985. These polymers were: polybenzoxazoles (PBO), known for its heat-resistance properties; and polybutylene terephthalate (PBT), which serves as an insulator for electronics.

In 1986, Kwolek retired from her research position at Dupont’s Pioneering Lab, however, continued to serve as a consultant. She provided mentorship to emerging women scientists and advocated for engaging children in the sciences. She also tutored students in chemistry on an ongoing basis. She contributed knowledge to Dupont, the National Research Council, and the National Academy of Science until she passed away.

Stephanie Louise Kwolek died on June 18, 2014, at the age of 90. She received various awards from chemical organizations throughout her career, and the Royal Society of Chemistry has a grant awarded in her name. In her words, “I don’t think there’s anything like saving someone’s life to bring you satisfaction and happiness.”