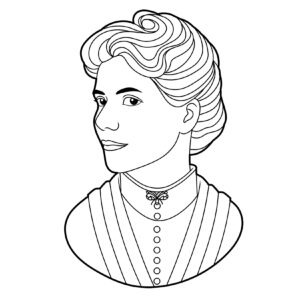 Sophia Gregoria Hayden was the first woman to earn an architecture degree from the Massachusetts Institute of Technology (MIT) in 1886. She was the architect for the Woman’s Building at the 1893 World’s Columbian Exposition in Chicago.

Hayden was born in Santiago, Chile to a Peruvian mother and American father on October 17, 1868. When she was six, she was sent to Boston to live with her grandparents. While in school she discovered an interest in architecture and applied to MIT to study architecture. When Hayden graduated, she was one of two women in the program and they were the first women to graduate from MIT with an honors degree in architecture. As a female, she found it difficult to find an apprenticeship, so she became a mechanical drawing teacher at a local Boston high school.

Meanwhile, in Chicago, a group of women led by Emma Gilson Wallace, lobbied to make their city the site of the World’s Fair of 1892. They also suggested forming a “Women’s Department for the Fair.” This was approved by the House of Representatives and a board was created with 117 women, including two Lady Managers from each state, territory, and the District of Columbia, as well as members-at-large. One of their projects was the Woman’s Building or Woman’s Hall.

In 1891, Hayden, at age 22, was one of fourteen female architects that submitted designs for the fair’s Woman’s Building. Hayden based her design on her thesis project, “Renaissance Museum of Fine Arts,” and was selected. Her building was one of 14 main buildings at the Chicago World’s Fair to celebrate the 400th anniversary of Christopher Columbus. Her design included sculptures, murals, and a roof garden that were all also designed by women. The building showcased exhibits created by women, including fine art, music, and literacy. The interior included many murals painted by female artists, but since the world fair buildings were demolished after the event, they were either destroyed or lost. However, the Woman’s Building inspired Sophie Oxholm from Denmark, who organized the 1895 Copenhagen Women’s Exhibition.

In 1894, Hayden designed a memorial for women’s clubs in the US, but it was never built. In 1900, Hayden married William Blackstone Bennett, an artist and interior designer in Winthrop, Massachusetts. They were married for nine years before her husband died of pneumonia on April 11, 1909. Hayden continued on as a designer and stayed in Winthrop with her stepdaughter, Jennie May.

Sophia Gregoria Hayden died on February 3, 1953, at age 84. The Woman’s Building of the 1893 World’s Columbian Exposition in Chicago is considered significant since all aspects were planned by women. A female architect was selected by a group of women, along with all female artists, artisans, and muralists. Composer and pianist, Amy Cheney Beach, composed a piece for the opening.