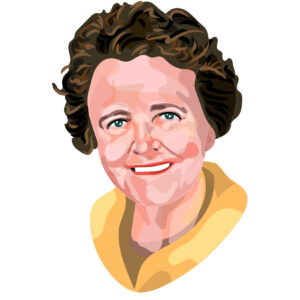 Ruth Patrick was an American phycologist (algae scientist) and stream ecologist. She is regarded as one of the early pioneers of the science of limnology, the study of inland aquatic ecosystems. Her research focused on diatoms (single-cell algae) and freshwater ecology. During her career, she authored more than 200 scientific papers, established multiple research facilities, and engineered ways to measure the health of freshwater ecosystems. Patrick showed that measuring the type and numbers of diatoms exposed the degree and type of pollution in bodies of water and used to help determine water quality. The Patrick Principle is the belief that biological diversity—the number, relative abundance, and ecological characteristics of species in an ecosystem—is the chief indicator of water health.

Ruth Myrtle Patrick was born on November 26, 1907, in Topeka, Kansas. She was the daughter of Frank Patrick and Myrtle Jetmore Patrick. Her father was a banker and lawyer, but had a botany degree from Cornell University and was a hobby scientist. He often took Ruth and her sister to collect specimens, especially diatoms, from local streams and ecosystems. From this, Patrick developed a lifelong interest in ecology and diatoms. She attended Coker College and earned a bachelor’s degree in biology in 1929. She later attended the University of Virginia to study botany and attained a master’s in 1931 and PhD in 1934.

Patrick volunteered at the Academy of Natural Sciences in Philadelphia from 1933 to 1945, and in 1939 became the curator of microscopy. In 1945, she accepted a full-time position as the head of microscopy, and in 1947 she founded the academy’s limnology department. During her research career, Patrick showed that the Great Dismal Swamp between Virginia and North Carolina was once a forest and had later been flooded by seawater. Later research proved that the Great Salt Lake in Utah was once a freshwater lake, and she gave evidence as to why the lake shifted to saltwater.

In 1945, Patrick invented the diatometer, a device that allows researchers to take better samples when studying diversity in water ecology. Later in her career, Patrick became involved in applied ecology, biodiversity, and conservation. She was a pioneer in using biodiversity to gauge a body of water’s overall health. Patrick collaborated with other academics, industry professionals, and the government. Her work with DuPont led to a better understanding on the effects of pollutants on rivers, lakes, and other water sources. She also helped develop the guidelines for the U.S. Congress Clean Water Act and consulted for President Lyndon B. Johnson and Ronald Regan.

During her career, Patrick was a member of the American Philosophical Society, American Academy of Arts and Sciences, and the National Academy of Sciences. She received the Eminent Ecologist Award from the Ecological Society of America in 1972 and Benjamin Franklin Medal for Distinguished Achievements in the Sciences in 1993. In 1996, she was awarded the American Society of Limnology and Oceanography’s Lifetime Achievement Award, National Medal of Science, and A.C. Redfield Lifetime Achievement Award.

Ruth Myrtle Patrick passed away at the age of 105 in 2013. She left the majority of her library, full of books on microscopy and microscopic observations, to the Linda Hall Library in Kansas City, Missouri. Along with her many awards, Patrick received over 25 honorary degrees. The Ruth Patrick Award, given by the Association for the Sciences of Limnology and Oceanography, started in 1998 “to honor outstanding research by a scientist in the application of basic aquatic science principles to the identification, analysis and/or solution of important environmental problems.”