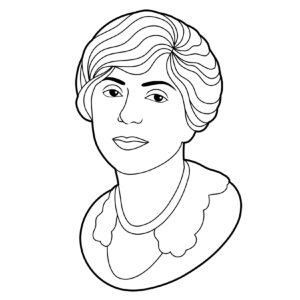 Rosalie Barrow Edge is known for her work in nature conservation and legislation, as well as her early work in women’s suffrage. Edge advocated for species preservation and worked to expose ineffectiveness in the conservation establishment. She established Hawk Mountain Sanctuary in Pennsylvania, the world’s first preserve for birds of prey, led multiple national grassroots campaigns, and influenced numerous environmental organizations. In 2009, she was the subject of the book Rosalie Edge, Hawk of Mercy: The Activist Who Saved Nature from the Conservationists.

Mabel Rosalie Barrow Edge, was born on November 3, 1877, in New York City where she spent most of her life. In 1915, Edge started working with the Equal Franchise Society and later New York State’s Woman Suffrage Party. Here she worked with Carrie Chapman Catt and played a role in the passage of the Nineteenth Amendment to the Constitution, giving US women the right to vote.

In 1920, Edge’s interest in birdwatching in Central Park and the discovery of declining hawk and eagle populations led her to become a champion for birds of prey. She believed strongly that all animals and birds should be protected before they became threatened or rare, and that the study of birds and animals should be done by safely and respectfully observing wild specimens in nature. She also insisted that widely used toxins and pesticides were harmful to ecosystems.

In 1929, Edge founded the Emergency Conservation Committee (ECC). She ran the ECC until her death, and used that platform to push for conservation reforms across the country. She encouraged the National Audubon Society to adopt more aggressive conservation stances towards a wider variety of birds. She also created Hawk Mountain Sanctuary in 1934 by purchasing property in the Appalachian Mountains and turning it into a safe-haven for birds of prey. The sanctuary eventually grew to about 2,500 acres (10 km2). Edge’s work at Hawk Mountain drew the attention of Rachel Carson, a fellow conservationist and scientist. Carson was able to study migration patterns at Hawk Mountain and gather strong evidence that exposure to DDT was harmful to birds of prey.

Though Edge was not formally educated in science or conservation, she worked closely with some of the top zoologists, conservationists, and politicians of the time and became a knowledgeable and respected conservationist. Edge believed strongly in the protection of birds, animals, and biodiversity, and became active in the preservation of national forests as well. She was at the forefront of national campaigns that established both the Olympic National Park and Kings Canyon National Park. She pushed to save thousands of acres of old-growth pines in Yosemite National Park and fought to strengthen the protection of Yellowstone National Park.

Rosalie Barrow Edge died on November 20, 1962, at the age of 85. She worked for over 30 years to protect biodiversity within ecosystems across America. Her belief that all people have a moral responsibility to care for nature influenced major laws, corporations, and other conservationist groups during her time. In a 1948 New Yorker profile, Edge’s friend and collaborator Willard Van Name described her as “the only honest, unselfish, indomitable hellcat in the history of conservation.”