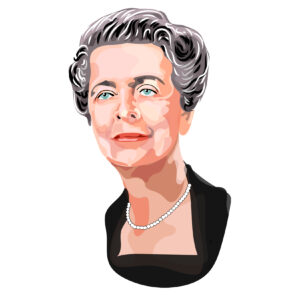 Rita Levi-Montalcini was an Italian scientist, Nobel laureate, and a senator for life in the Italian Senate from 2001 until her death. Levi-Montalcini received many awards, such as the Golden Plate Award of the American Academy of Achievement, the Ralph W. Gerard Prize in Neuroscience, and the Nobel Prize for her contributions in neuroscience. She was the first Nobel Laureate to reach the age of 100 and at the time of her death, the oldest living Nobel Laureate.

Levi-Montalcini was born on April 22, 1909, in Turin, Italy. Levi-Montalcini developed an interest in medicine when a close family friend died of stomach cancer. She attended the University of Turin Medical School and graduated with her MD in 1936. She stayed at the University of Turin as the assistant to the neurohistologist Giuseppe Levi in the anatomy department. In 1938, her time there was cut short due to Mussolini’s Manifesto of Race and the laws barring people of Jewish faith from holding positions within universities.

During WWII Levi-Montalcini continued her research from her bedroom by setting up her own laboratory and studying the growth of the nerve fibers of chicken embryos. In September 1943, her family fled south to Florence. While hiding, she also set up a laboratory in a corner of their shared living space. In August 1944, after the liberation of Florence, Levi-Montalcini volunteered for the Allied health service.

Levi-Montalcini’s family returned to Turin in 1945. In September 1946, she was offered a semester research fellowship at Washington University in St. Louis, Missouri with Professor Viktor Hamburger. She was able to duplicate her home laboratory experiment results and Hamburger offered her a research associate position. Levi-Montalcini stayed at Washington University for 30 years. In 1952, she isolated nerve growth factor (NGF) from observations of certain cancerous tissues that cause extremely rapid growth of nerve cells. In 1958 Levi-Montalcini became a full professor. In 1962, she established a second laboratory in Rome and split her time between the two.

In 1963, Levi-Montalcini became the first woman to receive the Max Weinstein Award for her significant contributions into neurological research. Through the sixties, she directed the Research Center of Neurobiology and directed the laboratory of cellular biology from 1969-1978. In 2002, she founded the European Brain Research Institute and served as president. In addition to her work on NGF, she identified the importance of palmitoylethanolamide and mast cell in pathology. In 1986, Levi-Montalcini and Stanley Cohen received a Nobel Prize for their NGF (nerve growth factor) research.

On August 1, 2001, Carlo Azeglio Ciampi, the President of Italy, appointed Levi-Montalcini a Senator for Life. A senator for life has life tenure and is equivalent to an upper chamber member.

Rita Levi-Montalcini died in Rome on December 30, 2012. Levi-Montalcini was also a founding member of Città della Scienza, a museum in Naples that allows visitors to explore and learn about science.