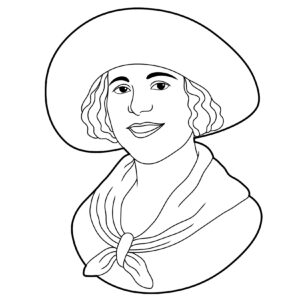 Osa Leighty Johnson was an American explorer and film maker. She collaborated on fourteen feature films, thirty-seven educational short films, eleven books, and many lectures with her husband Martin Johnson. Their expeditions to the South Pacific, Africa, and Borneo were captured over 27 years in photography and film. Their films, photographs, expedition reports, and personal memorabilia are on display at The Martin and Osa Johnson Safari Museum in Chanute, Kansas.

Osa Helen Leighty was born on March 14, 1894, in Chanute, Kansas. In 1910, at sixteen, she eloped with Martin Johnson. The couple spent the next three years traveling across Canada, the United States, and Europe. Martin was the lecturer while Osa was a part of the show, dancing and singing Hawaiian songs.

In 1917, the couple traveled to the Solomon Islands and New Hebrides (Vanuatu). They started on the island of Malaita and spent a month visiting villages, Langa Langa Lagoon, and Lau Lagoon. They then filmed Solomon ceremonies and customs on the island of Launguia in the Ontong Java atoll. After visiting Guadalcanal, San Cristobal, and Santa Ana Islands they went to Sydney, Australia. Next, the crew sailed to the New Hebrides where they visited Vao, Espiritu Santo, and Malekula. Here they encountered the local people, the Big Nambas, and their chief, Nagapate. The encounter was not pleasant since Osa and Martin barely escaped with their lives running through the miles of mountains and rainforest terrain from the Big Nambas.

The footage that they captured was used to create the silent film Among the Cannibal Isles of the South Pacific. In 1919, the Johnsons returned on another expedition to New Hebrides. They started in Vao, then returned to Malekula and filmed the Big Nambas again. This time with an armed escort. They continued on to Tomman and Espiritu Santo ending with 25,000 feet (7,600 m) of film and 1,000 photographs.

In February 1920, the Johnsons traveled to North Borneo and sailed up the Kinabatangan River to capture footage of water buffalo, orangutans, elephants, and other wildlife. In 1921, the collection of photos and film turned into the full-length feature Jungle Adventures.

In 1921, the Johnsons started filming in Africa. They started in Kenya where they were instructed to make authentic wildlife films where nature was undisturbed by human interaction. With a hundred thousand feet (34,000 m) of film, the Johnsons created their motion picture Trailing African Wild Animals.

In 1932 the Johnsons got their pilot’s licenses. On their fifth African trip, from 1933 to 1934, they flew the length of Africa filming aerial scenes of large herds of elephants, giraffes, and other animals moving across the plains. They were the first pilots to fly over and film Mount Kenya. This footage was used in the 1935 feature film Baboona.

The Johnsons went on several African safaris and expeditions between 1923 and 1935, that lead to magazine articles and films. Johnson was fond of living at Mount Marsabit in northern Kenya near what she called Paradise Lake. Johnson was able to decipher languages between the natives and the film crews which gave her an advantage when producing films like Martin’s Safari and Simba: King of the Beasts.

On January 12, 1937, the Johnson’s plane crashed in California. Johnson had a broken leg and a back injury and her husband, Martin, was fatally wounded. Johnson later produced Jungles Calling in 1938 as a tribute to Martin.

In 1939, she continued her expeditions and signed a contract with Darryl Zanuck at Twentieth Century Fox. She led the expedition and filmed the safari scenes for Stanley and Livingstone. The Los Angeles Times called her the first women to take sole responsibility for an African Expedition. I Married Adventure, her autobiography, was the best-selling non-fiction book in 1940. In 1952, The Big Game Hunt was television’s first wildlife TV series.

In 1953 Osa Leighty Johnson died of a heart attack at the age of 58 in New York. The Martin and Osa Johnson Safari Museum located in Kansas that opened in 1961, still exists today.