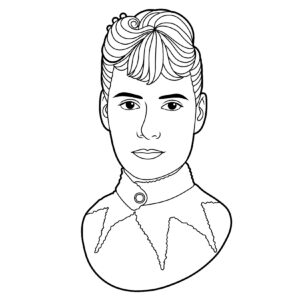 Elizabeth Cochran, best known by her writer’s pseudonym Nellie Bly, was an American journalist credited as one of the pioneers of investigative journalism. She reported mainly about women’s and social rights’ issues, although she is most known for her 72-day trip around the world.

Nellie Bly was born into an upper-middle class family in 1864, in Pennsylvania. She was the first daughter of her mother Mary Jane, while her father Michael had already 15 children from two previous marriages. Michael Cochran passed away unexpectedly and without a will when Nellie Bly was just six years old, which put the family in a precarious financial situation that would last for years.

At eighteen, Nellie Bly had to drop out of college and was helping her mother run a boarding house, when her luck changed. Bly wrote a rebuttal letter to the editor of the Pittsburgh Dispatch in reaction to a piece that argued against women working. The editor responded by offering her a job as a journalist. Elizabeth Cochran took the pen name of Nellie Bly, named after a song by Stephen Foster about a man that sings to his beloved while she does chores.

Bly’s journalism at the Pittsburgh Dispatch was not simple reporting, she became known for her investigative journalism pieces on topics centered around women’s rights, including working at a sweatshop to expose the harsh conditions of labor. Despite this early success, Bly grew frustrated with the limitations imposed by the editors, who had relegated her work to trivial pieces for the women’s section of the journal.

She pushed for more relevant assignments, and managed to convince her editors to send her as a correspondent to Mexico. There, she reported about the ubiquitous political corruption and openly criticized the dictatorial government for the jailing of a journalist. She was forced to return to Pittsburgh under the threat of arrest, and soon after, in 1887, she decided to quit and relocate to New York.

Bly struggled to find a job in journalism as a woman, but eventually, she landed a position at the New York World, owned by Joseph Pulitzer, and was assigned an investigation that would catapult her career. Bly infiltrated the Asylum for the Insane on Blackwell’s Island posing as mentally ill. She spent ten days there which she recounted in “Ten Days in a Mad-House.” The piece was an editorial success and led to a legal investigation of the mental institution for abuse and neglect. As a result, several changes were implemented in the New York City’s Department of Public Charities and Corrections.

In 1889, inspired by Verne’s Around the World in Eighty Days, Bly set out to emulate Phileas Fogg’s fictional journey, which she accomplished in a record 72 days. The trip was heavily publicized and earned Bly international fame.

In 1895, Bly married millionaire steel manufacturer Robert Seamen and retired from journalism. When her husband died ten years later, she took control of the company, where she demonstrated her industrial curiosity and business instinct. She actively participated in product design, and some of her innovations are still in use today. She also put her belief in social reform to practice and offered her employees several benefits, including healthcare and recreational activities. Unfortunately, her lack of experience and understanding of the finances of the business eventually led to bankruptcy.

Bly returned to journalism, showing the same inquisitive adventurous nature that she did in her early career. She reported from the Eastern front of the World War I conflict, where she was mistaken for an English spy and arrested. Later, she covered the Women’s Suffrage Movement. Nellie Bly died of pneumonia in 1922, at age fifty-seven.