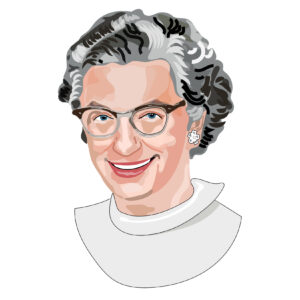 Nancy Grace Roman is an American astronomer and called the “Mother of Hubble.” Roman was both the first Chief of Astronomy in the Office of Space Science at NASA Headquarters, and the first woman to hold an executive position at NASA. Roman was a spokesperson and advocate of women in science throughout her career, and received recognitions from several women’s organizations, including the Women’s Education and Industrial Union, the Ladies’ Home Journal Magazine, Women in Aerospace, the Women’s History Museum, and the American Association of University Women. She was also one of four women featured in 2017 in the “Women of NASA LEGO Set,” which of all her honors she described as “by far the most fun.”

Roman was born on May 16, 1925, in Nashville to Irwin and Georgia Frances Roman. Shortly after birth, Nancy’s father was hired as a geophysicist to advise oil companies drilling prospects; and the family moved to Oklahoma. From there they traveled the nation, eventually settling in Nevada after Irwin was named Regional Chief for Federal Research in Geophysics.

At the age of 12, her family moved to Baltimore where she participated in an accelerated school program, and later in 1942 graduated high school in three years. She then went on to Pennsylvania, to begin studying astronomy at Swarthmore College. Roman studied under Peter Van de Kamp, who was the head of the Astronomy Department.

Roman began working at the Sproul Observatory in 1943, processing astronomical photographic plates and began graduate school at the University of Chicago where she obtained a doctorate in 1949. Following her research program, Roman was hired to work in the radio astronomy program by the Naval Research Academy. Her work included using various frequencies to measure distance, and she mapped much of the Milky Way galaxy.

In 1959, Roman led a NASA space program, with the intention of traveling the country and giving speeches in support of NASA’s endeavors to launch a telescope into space. In an interview with the National Air and Space Museum, Roman stated “The idea of coming in with an absolute clean slate to set up a program that I thought was likely to influence astronomy for 50 years was just a challenge that I couldn’t turn down.” Roman later became the Head of Observational Astronomy.

From 1959 through the 1970s, Roman managed proposals for NASA projects based on their credibility and her own knowledge. She was the overseer for the orbiting astronomical observatories (OAO) program, which developed and launched several satellites, to obtain data and trial-and-error experience that would eventually lead to the Hubble Telescope. Roman supervised the launch of the three small astronomical satellites: the Uhuru in 1970, the Small Astronomy Satellite 2 in 1972, and the Small Astronomy Satellite 3 in 1975. She is credited with planning other programs including Spacelab, Apollo, and Skylab.

In 1969, NASA requested permission to study the science of a 3m-class telescope in space from the National Academy of Sciences. In 1971, Roman formed the Science Steering Group for the Hubble Telescope, which was then called the Large Space Telescope, (LST). During the 1970s, Roman performed extensive research, experiments, and public relations events to promote the Hubble (LST) program. In 1990, the Hubble Telescope launched aboard the Space Shuttle Discovery.

Roman became the Head of Astronomical Data at the Goddard Space Center in 1995 and later began teaching advanced middle school and high school students. Roman stated “One of the reasons I like working with schools is convincing girls that they can be scientists.” In 2000, Roman began recording astronomy textbooks, for Reading for the Blind; a role she held for ten years. Roman was active in several organizations, including the American Association of University Women and served on the Swarthmore Board of Managers from 1980 to 1988. Roman was also the recipient of awards such as the Citation for Public Service, from Colorado Women’s College, the Exceptional Scientific Achievement Award from NASA, the Lifetime Achievement Award for Women in Aerospace, and the Woman of Distinction Award. Both the NASA fellowship program, and the Nancy Grace Roman Technology Fellowship in Astrophysics, were named in her honor; along with a “Women of NASA” LEGO set featuring Roman.

Nancy Grace Roman died on December 25, 2018, at age 93 in Germantown, Maryland. A video presentation documenting Roman’s career and contribution to science was created in her honor: “Nancy Roman – The Mother of Hubble” (Episode 113 of the “Hubblecast”). In May 2020, NASA renamed the Wide Field Infrared Survey Telescope, the Roman Space Telescope, in her honor.