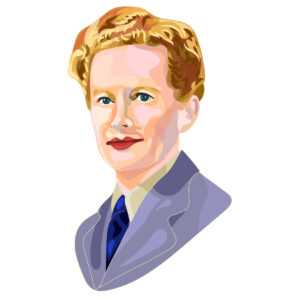 Nancy Bird-Walton was an Australian aviator. Her first flight was when she was 13 years old, by the time she was 17 she had her Class “A” license, and by 19 she had her commercial license. In 1924, she was the youngest Australian woman to get a pilot’s license. Bird-Walton became known as “The Angel of the Outback” when she flew an air ambulance for people living in the Outback of Australia. Bird-Walton also taught women around Australia how to fly during World War II, and founded the Women’s Pilot Association.

Nancy Bird-Walton was born on October 16, 1915, in Kew, New South Wales, Australia. Growing up during the Australian Depression, Bird had to leave school at 13 to help support her family. After being taken on a plane during a local fair, Bird knew she wanted to become a pilot herself. She took her first lesson with aviator Charles Kingsford Smith. He had recently opened a pilot school and Bird-Walton was one of his first students. During this time women primarily learned to fly for recreation, but Bird wanted to make a career out of it.

After obtaining her Class “A” license at age 17, and her commercial license at age 19, Bird-Walton bought her first plane “Gipsy Moth.” With her copilot Peggy McKillop, the two flew around local fairs, allowing people to fly and see female pilots for the first time. In 1935, Reverend Stanley Drummond asked Bird-Walton to help create a flying medical service in the outback of New South Wales. They created The Royal Far West Children’s Health Scheme that helped transport medical supplies and nursing staff to those that were not able to reach a hospital. She was nicknamed the “Angel of the Outback” for her services and she used road maps as navigation while flying. When World War II broke out Bird-Walton helped train and recruit women for the Women’s Auxiliary Air Force (WAAF), in case Australia needed more pilots. Due to Bird-Walton marrying Englishman Charles Walton, she could not join the WAAF, but she still was the Commandant for the training during the war.

Nancy Bird-Walton died on January 13, 2009, at age 93. During Bird-Walton’s flying career, she was never involved in an accident. She had her pilot license until 2006 when she was 90 years old, being a pilot for over 70 years. She was the first woman in any of the Commonwealth nations to obtain a commercial license that allowed her to carry passengers, and the youngest Australian woman to obtain a pilot license. A terminal in the Bourke Airport was named after her, and her dedication to aviation. The first Airbus A380 for the Australian airline Qantas was named in her honor, using her preferred name “Nancy-Bird.”