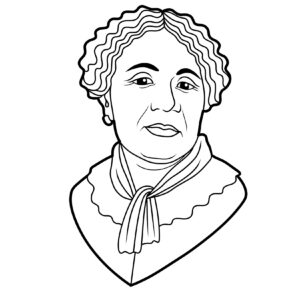 Mary Jane Seacole was a British-Jamaican author, nurse, businesswoman, and healer. She was known as “Mother Seacole,” a heroine of the Crimean war for her efforts caring for sick and wounded soldiers. In July 1857, her autobiography, Wonderful Adventures of Mrs. Seacole in Many Lands, was the first autobiography written by a mixed-race or black woman in Britain. Posthumously, awards, buildings, learning programs, and statues celebrate Mary Seacole and her story is a part of the National Curriculum of Great Britain.

The daughter of James Grant, a British Lieutenant and “The Doctress,” a Creole woman, Mary Jane Grant was born in Kingston, Jamaica in 1805. Seacole spent her childhood at Blundell Hall, a boarding house which her mother ran to heal invalid soldiers and their wives. From her mother, Seacole learned the traditional Caribbean and African herbal remedies and acquired vast knowledge of treating ailments, tropical diseases, and war injuries. Her family’s close ties with the army meant Seacole could watch military doctors closely, amalgamating their learned medicine with the more traditional methods of her mother.

Seacole spent some years living with an elder patroness’s family where she received a good education before returning home to Blundell Hall. An avid explorer, Seacole traveled to England twice as a teenager, before furthering her journeys to the Bahamas, Haiti, and Cuba, where she exported goods for sale in Kingston. After a short marriage with Edward Seacole who died in 1844, Seacole devoted her life to nursing and traveling. In 1850, she actively treated the ill during the cholera epidemic and boasted that no newborn or mother ever died under her care. She migrated to Panama where she ran a small shop before a cholera outbreak in 1852 during which she used her experience to heal patients.

In 1854, Seacole requested the War Office in London to send her as an army nurse to Crimea. After being refused, Mary traveled at her own expense and established the British Hotel, “a mess-table and comfortable quarters for sick and convalescent officers” near Balaclava. As a nurse, sutler, and caterer, “Mother Seacole” gained an admired reputation for healing the wounded in her hotel and on the battlefield. After the war, Seacole returned to England ill and destitute. A benefit festival was organized to raise funds for her in which her name was “shouted by a thousand voices.” In 1857, she became the first mixed-race or black woman to publish a travel memoir, “Wonderful Adventures of Mary Seacole in Different Lands,” which was a success. Seacole went on to spend her time in Jamaica and Britain nursing the ill.

Mary Jane Seacole died of apoplexy at her home in London, England on May 14, 1881. Seacole was first recognized posthumously in 1954 when the Jamaican General Trained Nurses’ Association became Mary Seacole House and then in 1991, she was awarded the Jamaican Order of Merit. Her grave in St. Mary’s Roman Catholic Cemetery was rediscovered in 1973 and restored by the British Commonwealth Nurses’ War Memorial Fund and the Lignum Vitae Club. In 2007, the National Curriculum of Great Britain added Mary Seacole’s story for students. Today, in addition to the numerous buildings, nursing wards, streets, and research centers named in her honor the Seacole prize is awarded annually to develop leadership in nurses, midwives, and health visitors, and the Mary Seacole Programme, a six-month leadership course, has been created in her honor. The following words are etched upon her statue: “I trust that England will not forget one who nursed her sick, who sought out her wounded to aid and succour them, and who performed the last offices for some of her illustrious dead.”