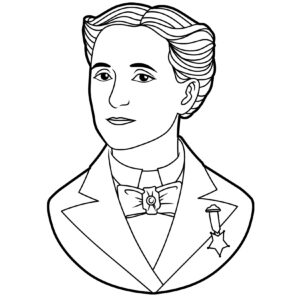 Mary Edwards Walker was an American physician, abolitionist, women’s rights activist, professor, author, prisoner of war, and Civil War surgeon. After serving on the front lines for the Union Army, Walker dedicated her life to fighting for women’s rights, and most notably, dress reform. She is the first and only woman to receive the Medal of Honor and joined the National Women’s Hall of Fame in 2000.

Born on November 26, 1832, Mary Walker was the youngest of Alvah and Vesta Walker’s seven children. Determined that their daughters receive an equal education, the Walkers’ started a local school, encouraged free-thinking, and adopted gender-neutral chores. Along with great exposure to her father’s medical literature, Walker worked on the family farm doing work that would have been restricted in traditional women’s attire. After attending Falley Seminary and teaching at a local school, Walker attended Syracuse Medical College. The only woman in her class, Walker graduated as a medical doctor in 1855. She set up a small private practice with her husband, Albert Miller, but the practice did not flourish because of little trust in a female physician.

After briefly attending Bowen Collegiate University, Walker applied as a war surgeon during the Civil War but was rejected because of her gender. Declining a nurse role, Dr. Walker chose to volunteer herself as a civilian to the Union Army. As an unpaid field surgeon, Walker served on the front lines of battles including the First Battle of Bull Run, the Battle of Fredericksburg, and the Battle of Chickamauga in addition to serving at the Patent Office Hospital in Washington, D.C. In 1862, the Army of the Cumberland employed Walker as the first female Army Surgeon. Captured by the Confederate troops in 1864, Walker was released from Castle Thunder after four months, in a prisoner exchange. For the remainder of the war, she supervised a female prison in Kentucky and headed an orphanage in Tennessee.

After the war, Walker became a lecturer and writer, supporting social reform issues such as health care, women’s rights, and dress reform. Met with widespread criticism for her dress style: trousers under knee-length dresses with a full skirt, Walker authored two books advocating the comfort, versatility, and hygiene of “men’s clothing.” In 1870, she was arrested for dressing as a man; a case overturned by the Police Court. As a member of the Central Women’s Suffrage Bureau, Walker believed the constitution gave women the right to vote, testifying before the U.S. House of Representatives in 1912 and 1914.

Mary Edwards Walker died on February 21, 1919, after suffering from a long illness. President Johnson had recognized her work in the Civil War with the Medal of Honor in 1865, but the honor was withdrawn following a change in criteria in 1917. She was posthumously restored the honor in 1977 by President Carter. The SS Mary Walker, a liberty ship in World War II was named in her honor as were the medical facilities at SUNY Oswego and the Mary Walker Clinic at Fort Irwin National Training Center. In remembrance of her dedication, the Philadelphia Veterans Multi-Service and Education Center house the Mary E. Walker House for homeless women veterans and the Dr. Mary E. Walker award is presented to outstanding military spouses for outstanding volunteerism. In 2012, her statue was unveiled at the Oswego Town Hall. “Let the generations know,” she is quoted to have said, “that women in uniform also guaranteed their freedom.”