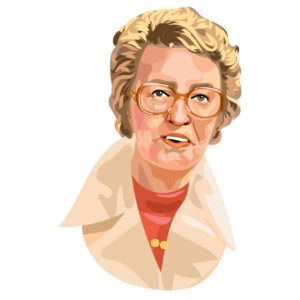 Mary Douglas (Nicol) Leakey was a British archaeologist and paleoanthropologist. She discovered one genus, 15 new animal species, 25 early hominid remains, and numerous other fossils and tools during her career. Her two most notable findings were of a skull of an Australopithecus boisei (1.8 million years ago) and an 80-foot (24 m) trail of preserved footprints of an early hominid (3.7 million years ago).

Mary Douglas Nicol was born in London, England on February 26, 1913. As a child, she traveled throughout Europe with her father, Erskine Nicol, and mother, Cecilia Frere. Her father was a landscape artist and her mother was a painter. Since she traveled frequently with her parents, she had little formal education. Her father taught her to read and write. Visiting prehistoric sites such as the caves at Pech Merl in Dordogne, influenced her career in geology and archeology. Her natural talent drawing also helped fuel her interest in Paleolithic archaeology.

In 1926, her father died and Leakey and her mother moved back to England. Her lack of formal education prevented her from enrolling in a university. Instead, she attended archaeology lectures at the London Museum and geology lectures at London University and University College and applied for field work.

In 1930, at the age of seventeen, Leakey joined her first excavation at the Hembury Dig in England where she illustrated the archaeological process and worked under Dorothy Liddell for three summers. Through this role, Leakey met archaeologist, Gertrude Caton-Thompson, who in 1932 employed Leakey to illustrate her book The Desert Fayum. Through Caton-Thompson she met Louis Leakey, a research fellow at Cambridge, who asked her to illustrate his book, Adam’s Ancestors. The couple married in December 1936.

Leakey led her first dig in Jaywick, England which led to her first publication, the Proceedings of the Prehistoric Society, in 1937. In 1938, while in Kenya, near the western coast of Lake Victoria, Leakey excavated a Proconsul africanus fossil; half of a skull, teeth, and the upper and lower jaw. Proconsul africanus, was an ape that lived during the Miocene epoch, from about 23 to 14 million years ago. She also uncovered fossilized insects, seeds, and fruit. On July 17, 1959, Leakey discovered an Australopithecus boisei skull at the dig in Olduvai, Tanzania. She reconstructed this hominid skull from hundreds of fragments.

In 1968, the Leakey Foundation was formed by a group of people interested in the human origins and evolution. The foundation supported Louis and Mary Leakey’s fieldwork as well as other field researchers such as Jane Goodall, Don Johanson, Dian Fossey, and Birute Galdikas.

In 1976 and 1977, Leakey and her team discovered hominid footprints of three specimens that were preserved in volcanic beds 30 miles (48 km) from Olduvai Gorge at a site called Laetoli. Leakey and her team also found the remains of 25 early hominids and 15 new animal species.

Mary Douglas (Nicol) Leakey died in Nairobi, Kenya on December 9, 1996, at age 83. During her career, she earned honorary doctorates from several universities including Yale, Oxford, Emory, Brown, and Columbia. Leakey received numerous individual awards as well as two joint awards with her husband; the Hubbard Medal from the National Geographic Society; and The Prestwich Medal from the Geological Society of London. The Leakey Foundation still supports and funds field research, and educational and outreach programs. The Leakey Foundation has expanded and now includes a podcast “Origin Stories” and a YouTube channel.