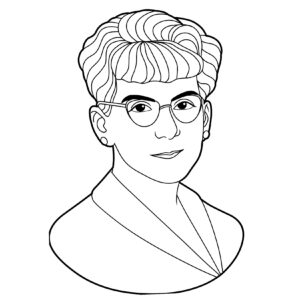 Suffragist, civil rights advocate, author, and journalist Marjory Stoneman Douglas served as a pivotal figure in the protection of the Florida Everglades. At the time there was little value seen in the subtropical marshlands. Douglas founded the Friends of the Everglades to combat overdevelopment and authored the book The Everglades: River of Grass as a means of bringing attention to the majesty of the Everglades.

Although Marjory Stoneman Douglas is most strongly associated with her work in relation to the state of Florida, she was born in Minneapolis, Minnesota on April 7, 1890. Her parents divorced when she was young, and she spent the majority of her youth with her mother’s family in Massachusetts. Douglas remained in Massachusetts for her college education, where she earned a degree in English from Wellesley College.  While attending school, Douglas became a member of the school’s first suffrage group.

In 1915, after a short-lived marriage, Douglas moved to Florida to work with her father, the publisher of The Miami Herald. In 1916 Douglas took a hiatus from journalism to join the American Red Cross in its efforts in Paris, France during World War I. Upon her return home, Douglas once again became involved in the women’s suffrage movement.  In 1917, she went to Tallahassee, Florida’s state capitol, to speak before the legislature on behalf of the women of the state and their desire to vote. She helped raise awareness later in life to the plight of migrant workers.  Douglas also spoke in front of the legislature on the importance of the Equal Rights Amendment.

The Miami Herald often featured editorials written by Douglas. She would use these opportunities to educate the public on a number of causes she found most important. Douglas wrote pieces that addressed women’s rights and civil rights. She often wrote about environmental issues as well.

Following her career as a journalist, Douglas began working as a freelance writer. She had a number of short stories printed in various publications, including The Saturday Evening Post. Many of her narratives did not possess a central theme of conservation, but a significant number of them did, furthering her efforts to educate the public. One piece specifically addressed the hunting of Everglades.

Marjory Stoneman Douglas died on May 14, 1998, at the age of 108. Perhaps Douglas’ most long-lasting contribution to the protection of the Everglades was the publication of her 1947 book The Everglades: River of Grass. When a friend suggested she participate as an author in a book series about American rivers, Douglas wanted to take part in the project. After exploring regional waterways, Douglas decided to argue that the series highlight the Everglades reframed as a river rather than a swamp. The book shined a light on the damage being done to the Everglades by development and pollution.