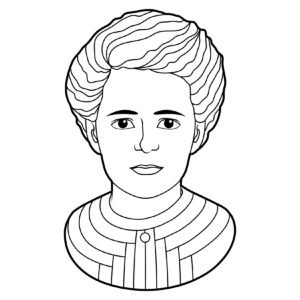 Marie Curie, a Polish and naturalized-French citizen, was the first woman to win a Nobel Prize. She was a physicist, chemist, and innovator in the study of radiation. Her career began with the examination of uranium rays in 1896. Curie is the only person to receive the Nobel Prize in two separate scientific fields. Her discoveries laid the foundation for radiation therapy and changed our understanding of atoms.

Marie Salomea Skolodowska was born on November 7, 1867, in Warsaw. She attended the boarding school, J. Sikorska, at the age of ten, and on June 12, 1883, she graduated from a gymnasium for girls. Curie could not participate in a male-only University, so she continued her studies in secret through the Flying University, an underground training institute in Warsaw. In 1893, at the age of 24, Curie moved to Paris to complete her master’s degree in Physics at the Sorbonne. The following year she continued by adding a degree in Mathematics. In June 1903, Curie was the first woman in France to defend her doctoral thesis.

In November 1903, Curie and her husband Pierre, alongside Physicist Henri Becquerels’, shared in the Nobel Prize for their research developing their theory on “Radioactivity” (a term she coined). The nominating committee initially objected to having a female Nobel laureate, but Pierre Curie insisted that the original research was his wife’s.

In 1911, she won the Nobel Prize in Chemistry for the discovery of two new elements Polonium and Radium. Curie was also the first person to win or share two Nobel Prizes. Throughout her life, Curie actively promoted radium uses, utilizing techniques she created for isolating radioactive isotopes. Curie’s work led to many developments, such as portable vehicles, auxiliary generators, and x-ray machines used throughout World War I in the field.  In the first year of the war, Curie directed 20 mobile radiological vehicles and an additional 200 medical science units at field hospitals. Nicknamed “Little Curries,” it is estimated they were used to treat over a million soldiers. In 1914, she set up France’s first operational military radiology center.

In 1914, Curie was appointed the Curie Laboratory Director at the Radium Institute at the University of Paris. She also founded medical research centers such as the Institute Curie, which is still used for vital cancer treatment research today. She was known for her candor and minimalistic lifestyle. She often refused monetary gifts and awards, insisting the scientific institutions she was affiliated with be given them instead. In a 2009 poll generated by New Scientist, Marie Curie was appointed the “most inspirational woman in science”.

Marie Salomea Skolodowska Curie passed away from aplastic anemia on July 4, 1934, from long-term radiation exposure, at age 66. In 1944, the Curies received another honor when the 96th element on the periodic table of elements was discovered and named “curium”.