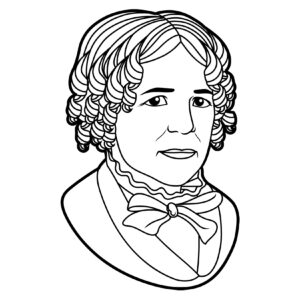 Maria Mitchell was an American astronomer, educator, writer, and naturalist. She is most notable for her discovery of comet 1847 VI, which was later named “Miss Mitchell’s Comet.” Mitchell was known internationally for her research and astronomical discoveries. She also served as a professor of astronomy at Vassar College for over twenty years.

Maria Mitchell was born on August 1, 1818, in Nantucket, Massachusetts. Mitchell was interested in astronomy and mathematics from an early age. Mitchell’s early education came from her father who was a teacher and amateur astronomer. He educated all of his children about nature and astronomy and also served as a public-school teacher. Maria Mitchell attended North Grammar school where her father was the principal and later attended Cyrus Pierce’s school for young ladies until the age of 16. After completing her education and serving as a teaching assistant, Mitchell opened her own school in 1835. In 1836, Mitchell also began to work as the first librarian of the Nantucket Atheneum; a role she held for 20 years. During this time, Mitchell assisted her father with geographical calculations for the U.S. Coast Survey and numerous other astronomical observations.

On October 1, 1847, Mitchell discovered Comet 1847 VI using a Dollond refracting telescope. She published her discovery in Silliman’s Journal in January 1848, and one month later she submitted the calculation of the comet’s orbit. Her discovery was celebrated at the Seneca Falls Convention later that year. The comet later became known as “Miss Mitchell’s Comet” in her honor.

After her discovery, Mitchell accepted a computing position for the U.S. Coast Survey at the U.S. Nautical Almanac Office in 1849. Here she tracked the movements of planets and their positions in order to assist sailors in navigation. Mitchell traveled to Europe in 1857 and worked with contemporary European astronomers and natural philosophers. After returning to the United States, she accepted a Professor of Astronomy position at Vassar College in 1865. Despite having no formal college education, Mitchell was the first person appointed to the faculty and was named the director of the Vassar College Observatory. She held this position for over two decades and also edited the astronomical column of Scientific American. Mitchell mentored many students and often involved them in her astronomical observations and research. She continued to teach at Vassar College until her retirement in 1888.

Mitchell was also involved in social issues throughout her life. She took part in the anti-slavery movement and refused to wear clothes made of Southern cotton. She helped found the Association for the Advancement of Women (AAW), a group with the goal “to receive and present practical methods for securing to women higher intellectual, moral and physical conditions, and thereby to improve all domestic and social relations.” Mitchell was the second president of the AAW in 1874 and 1875. She then created a Committee on Science to evaluate and encourage the progress of women in science. She headed this group until her death.

On June 28, 1889, Maria Mitchell passed away at the age of 70. Mitchell’s discoveries and accomplishments won her numerous awards and recognitions. In 1848, she was the first female elected Fellow of the American Academy of Arts and Sciences. She was one of the first women elected to the American Philosophical Society, and was granted honorary degrees from Rutgers Female College, Columbia University, and Hanover College. Mitchell was also presented a gold medal prize for her discovery by King Christian VIII of Denmark in 1848. Mitchell was made an Honoree for the 1989 National Women’s History Month, and she was inducted into the National Women’s Hall of Fame in 1994. Additionally, Mitchell was honored by being the namesake of the World War II Liberty ship, the SS Maria Mitchell.