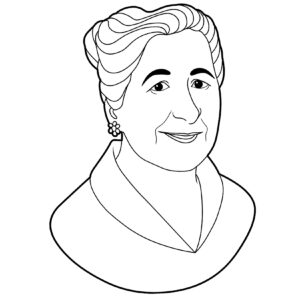 Mardy Murie is known as the “Grandmother of the Conservation Movement” for her career as a wilderness advocate and an early female leader in America’s conservation movement. Along with her husband and other conservationists, Murie was a key contributor to establishing the Arctic National Wildlife Refuge in Alaska. The Muries also campaigned for the Wilderness Act, successfully getting it signed into law in 1964. Mardy Murie also served as the secretary and governing council member of the Wilderness Society.

Margaret Thomas “Mardy” Murie was born on August 18, 1902, in Seattle, Washington and moved to Fairbanks, Alaska as a young girl. At age 15 before railroads had reached Fairbanks, Mardy journeyed 400 miles (640 km) down the Alaskan coast by horse-drawn sleigh, cart, and dogsled to visit her father. In 1924, she became the first woman to graduate from the Alaska Agricultural College and School of Mines, which is now known as the University of Alaska Fairbanks. There, she met and married biologist Olaus Murie. Their honeymoon was an eight-month-long expedition in Alaska’s Brooks Range to study caribou by boat and dogsled for the U.S. Biological Survey.

Soon after, they moved to Jackson Hole, Wyoming, where they raised three children. Here they helped establish the Grand Teton National Park and the Teton Science School. Through their positions at the Wilderness Society, Mardy and Olaus advocated for legislation to protect America’s wilderness. In 1956, they accompanied zoologist George Schaller on another expedition to Alaska to conduct a study in the hopes of promoting its federal protection. Their work led to the establishment of the Arctic National Wildlife Refuge in 1960.

The Murie Ranch, located in the Grand Teton National Park, became a base camp for conservation leaders in the 1940s through the 1960s and it was where they converged to campaign for the 1964 Wilderness Act. Murie testified before Congress in favor of the Alaska National Interest Lands Conservation Act, which was signed by President Carter in 1980, doubling the size of the Arctic National Wildlife Refuge.

Murie wrote about her childhood and her adventures with her husband in Wyoming and Arctic Alaska in her book Two in the Far North. She published two other books, one of which was co-authored by her husband.

Margaret Thomas “Mardy” Murie died in Moose, Wyoming, on October 19, 2003, at the age of 101. Throughout her life, she received honorary certificates from the National Park Service, Sierra Club, and National Wildlife Federation as well as the Audubon Medal, the John Muir Award, and the Robert Marshall Conservation Award. President Bill Clinton awarded Murie the Presidential Medal of Freedom in 1998 and she received the National Wildlife Federation’s highest honor through the J.N. Ding Darling Conservationist of the Year Award.