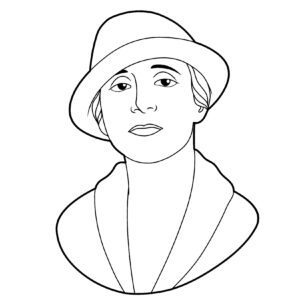 Louise Arner Boyd was the wealthy heir to a gold rush fortune that financed and led several expeditions to the Arctic. Her travels led to important scientific discoveries and technological innovations.

Arner Boyd was born in 1887 in San Rafael, California. Her family was wealthy, and she lived a very privileged life growing up. Her two brothers died when she was a teenager and left her as an only child. After their deaths she traveled extensively with her parents. In 1919, Arner Boyd took her first of many cross-country drives across the United States.

After her parents’ deaths in 1919 and 1920, at thirty-two, Arner Boyd became the sole recipient of the family’s inheritance. She used the money to travel. In 1924 on a trip to Norway, she first saw the Polar Ice Pack, inspiring her to plan an Arctic expedition. The expedition took place in 1926, making it the first ever Arctic expedition led by a woman. The trip was the first of many more to come.

In 1928, she was getting ready to set sail on her second expedition in Norway, when news broke that polar explorer Roald Amundsen and his crew had gone missing. Arner Boyd not only put her ship, her crew, and provisions at the disposal of the rescue mission; she took an active role searching and was awarded official recognition by the French and Norwegian governments.

In the 1930s, Arner Boyd led several more expeditions, some to places that had never been formally mapped. She understood the scientific value of these trips, and recruited botanists, geographers, geologists, and photographers to travel along with her, or teach her the skills that she needed.

In 1934, she was elected as the U.S. delegate for the International Geographical Congress in Warsaw, and she turned the trip into a three-month journey across Poland. She documented extensively her experience, which resulted in a photography book published by the American Geographical Society in 1937.

Arner Boyd was a pioneer in using photography to draw maps, and the pictures she took of Greenland are still used by scientists today to document and understand the effects of climate change. She discovered over fifty new plant species, and at least one glacier. In 1938, she became the second woman in history to be awarded the Cullum Medal from the American Geographical society.

In 1941, when she was fifty-four years old, she led her final expedition to Greenland. The expedition was a secret assignment from the three-month U.S. National Bureau of Standards, with the main purpose of improving radio communication technology. The mission was a success, and she received praise from the U.S. Army and the National Bureau of Standards from the U.S. Department of Commerce.  Arner Boyd continued to collaborate with the U.S. Army during the remainder of the war. Her last trip to the Arctic was in 1955, when she was the first woman to be flown over the North Pole.