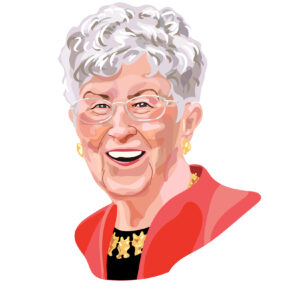 Loretta Ford is an American educator and nurse. She cofounded the first nurse practitioner program, providing increased healthcare in rural and urban areas. In 1999, Ford was named a Living Legend of the American Academy of Nursing. Ford was the founding dean of the nursing school at the University of Rochester and developed the unification model of nursing. This approach includes education, research, and clinical practice to provide holistic training of nurses.

Born in New York City on December 28, 1920, Loretta Ford grew up with aspirations to become a teacher. Due to her financial situation and age, Ford began working as a nurse’s aide at the Middlesex General Hospital in New Jersey after graduating high school. While working at the hospital, Ford lived and studied with nurses and decided to pursue a nursing career. She earned her Diploma in Nursing from Middlesex General in 1941.

After graduation, Ford joined the Visiting Nurse Service of New Brunswick but enlisted in the U.S. Army Air Force during World War 2. Due to her vision, she could not enter flight nurse training but instead served at base hospitals. Her civil work enabled her to complete her training at the University of Colorado, where she earned a B.S. in nursing with a Public Health Certificate in 1949 and a Master of Public Health Nursing Supervision in 1951. In addition to mentoring nursing and public health students, she worked for Boulder County as a public health nurse, becoming the Director of Nursing at the Boulder City-County Health department. In 1961, Ford earned her Doctorate in Education from the University of Colorado, earning full professorship at the School of Nursing in 1965.

Throughout her work for Boulder County, Ford understood the gap in healthcare in rural Colorado on the front lines. She trained students from the Denver Visiting Nurse Service to fill temporary health clinics. This experience gave her the confidence that nurses, with specialized training, could increase the quality and quantity of care in rural areas. Through the Western Interstate Commission for High Education in Nursing, Ford began to develop this specialized curriculum for nurses. In 1965, Ford and Henry K. Silver, a pediatrician, created the first pediatric nurse practitioner program at the University of Colorado. The program, despite facing initial prejudice and opposition, became an integral component of the healthcare system. Today, there are over 290,000 nurse practitioners across the United States. In 1972, Ford founded the Unification Model of Nursing as dean at the University of Rochester, a design that included education, research, and clinical practice in the nurse practitioner program. She remained an active consultant for many organizations throughout her career.

The author of more than 100 publications, Loretta Ford, retired in 1985 and moved to Florida, where she lives today. With six honorary doctorates, Ford received the Ruth B. Freeman Award in 1989 and the Gustav O. Lienhard Award in 1990. In 1999, she was named a Living Legend by the American Academy of Nursing and awarded a Lifetime Achievement Award from The Nurse Practitioner in 2003 as well as the Elizabeth Blackwell Award. She was inducted into the National Women’s Hall of Fame in 2011 and the Colorado Women’s Hall of Fame in 2012. Of nurses, Dr. Ford has said, “They are our best national renewable resource for the continuance of our civilization, security, economy, welfare, wealth and happiness…Our future depends on them.”