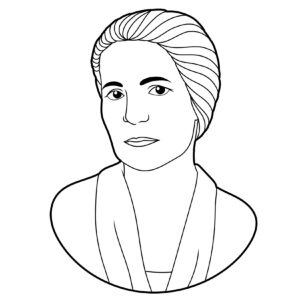 Lise Meitner was an Austrian physicist who worked on radioactivity and nuclear physics. She was part of the team that discovered the element protactinium and nuclear fission, the latter achievement for which her colleague Otto Hahn was awarded the Nobel Prize. Meitner was recipient of numerous awards and honors. In 1997, the chemical element 109 meitnerium was named after her. However, her exclusion from the Nobel Prize is considered to be one of the biggest injustices in Nobel Prize history.

Meitner was born November 7, 1878, the third of eight children in a Jewish family in Austria. She was drawn to math and science from a young age, but at the time women were not allowed to enter higher education. In 1899, she was allowed to enter college and become one of four females to pass the entrance exam. In college, Meitner was inspired by one of her professors, Ludwig Boltzmann, to study physics. In 1905, she became the second woman from the University of Vienna to earn a doctorate in physics. After obtaining her doctorate, she went to Berlin to attend the lectures of Max Planck. This was unusual since Planck did not believe that women should attend university. At the Friedrich Wilhelm University, Meitner approached Heinrich Rubens, the head of experimental physics, about doing research. Through Rubens, she met Otto Hahn, who became her longtime collaborator and friend for over 30 years.

During their early years, Meitner worked together with Hahn and they co-authored nine papers between 1908-1909. One of their biggest discoveries was that of radioactive recoil, which is when a daughter nucleus is forcefully ejected from its matrix at the moment of decay. Meitner observed that radioactive recoil could be a new way of detecting radioactive substances. They set up tests and soon discovered two more new isotopes. In 1912, Hahn and Meitner moved to the newly founded Kaiser Wilhelm Institute (KWI) for Chemistry. Planck appointed her his assistant at the Institute for Theoretical Physics at the Friedrich Wilhelm University, making her the first female scientific assistant in Prussia. In 1918, they made their Nobel Prize nominated discovery, the element protactinium.

From 1923 to 1933, Meitner taught a seminar at Friedrich Wilhelm University each semester and supervised doctoral students at the KWI for Chemistry. In 1926, she became a professor extraordinarius (a professor without a chair), the first woman university physics professor in Germany. Due to Hitler’s rise, Meitner was forced to flee Germany for Sweden. Hahn and Meitner met secretly in Copenhagen in November to plan a new round of experiments. In February 1939, Meitner published the physical explanation for the process she named nuclear fission. This discovery led to the Manhattan Project and the creation of atomic bomb. Meitner turned down working on the Manhattan Project, saying, “I will have nothing to do with a bomb!” Meitner retired to Cambridge, England, in 1960.

Lise Meitner died October 27, 1968, at age 89. In 1992, element 109, the heaviest known element in the universe, was named Meitnerium (Mt) in her honor. Many consider Lise Meitner the “most significant woman scientist of the 20th Century.” Posthumously, she received several other naming honors: the Hahn–Meitner-Institut in Berlin, craters on the Moon and Venus, and the main-belt asteroid 6999 Meitner. Awards, such as the Lise Meitner Prize and the Gothenburg Lise Meitner Award as well as buildings and statues are also named in her honor. The inscription on her gravestone, added by her nephew Otto Frisch, reads, “Lise Meitner: a physicist who never lost her humanity.”