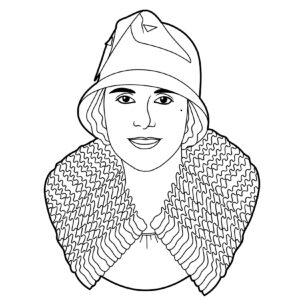 Lady Grace Marguerite Hay Drummond-Hay was a British journalist and a world traveler. She was the first woman to travel by air throughout the world in a zeppelin. In 1928, she was the only woman on the first transatlantic flight of the Graf Zeppelin from Germany to America. In 1929, she was on the Graf Zeppelin’s Round-the-World flight and was the only female among the 60 male passengers and crew. She wrote about her experiences and growing knowledge of aviation for U.S. newspapers.

Lady Grace Marguerite Hay Drummond-Hay was born, Grace Lethbridge, on September 12, 1895, in England. She married Sir Robert Hay-Drummond-Hay who was fifty years older than her when she was twenty-five. He passed away in 1926 when she was thirty-one, and she became a widow. Hay Drummond-Hay started her career as a journalist for British newspapers like The Sphere. In the late 1920s she moved to the U.S. and began writing for the Hearst newspaper series. She also contributed to the Chicago Herald and Examiner.

In October 1928, she boarded the German airship LZ-127 also known as the Graf Zeppelin. The Graf Zeppelin was a hydrogen filled, active airship transporting passengers between 1928 and 1937. It was the first form of transportation that offered a commercial intercontinental flight service for passengers. The flight took Lady Hay Drummond-Hay as the only female passenger, and other passengers across the Atlantic Ocean in a 6,168 mi (9,926 km) journey. It departed from Friedrichshafen, Germany to the Lakehurst Naval Air Station in New Jersey. At the time, this was the longest non-stop flight (111 hours, 44 minutes). She was among a diverse cohort with Austrian, American, and Spanish correspondents, photographers, health experts, and navy officials.

In August 1929, Hay Drummond-Hay was on the Graf Zeppelin’s Round-the-World flight. This was partially sponsored by Hearst and Hay Drummond-Hay was the only female among the 60 male passengers and crew. The circumnavigation, including stops, took 21 days, 5 hours, and 31 minutes. They covered 20,651 mi (33,234 km) and was the fastest circumnavigation of the globe at the time.

In May 1936, she boarded the airship LZ-129, the Hindenburg’s maiden flight from Germany to the United States. The zeppelin traveled from Frankfurt, Germany to Lakehurst, New Jersey. The airship departed from the Rhein-Main airfield (111 m above sea level) instead of from Friedrichshafen (417 m above sea level). The lower elevation allowed the airship to lift 6 tons more than would have been possible if departure occurred from Friedrichshafen. Lady Hay Drummond-Hay was the only woman on this flight among 50 passengers.

Her job as a journalist and correspondent required her to enter war zones. She traveled with her colleague, Karl von Wiegand throughout the field work. Some locations included Abyssinia (today known as Ethiopia) and Manchuria (today part of China). Hay Drummond-Hay and Wiegand were interned in a Japanese prison camp during World War II in the Philippines. In 1943, they were freed and reached the U.S. on a Swedish rescue ship called the SS Gripsholm. Though by that time Hay Drummond-Hay was very sick from the poor conditions in the camp. She was diagnosed with coronary thrombosis.

Lady Grace Marguerite Hay Drummond-Hay died on February 12, 1946, at age 50, in the Lexington Hotel in Manhattan, New York. Her articles were featured in the Australian documentary “The Airship: Ship of Dreams” and the Dutch documentary “Farewell.”