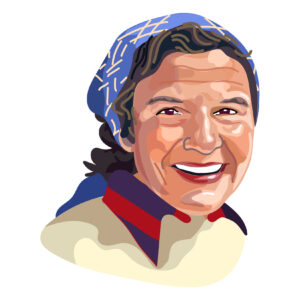 Krystyna Chojnowska-Liskiewicz is a Polish sailor and in 1978 became the first woman to sail around the world solo. Prior to the start of the trip, Chojnowska-Liskiewicz was an experienced sailor as well as a trained ship construction engineer. Her yacht was designed specially for her needs. She launched in March 1976 and the journey around the globe covered 28,696 miles (46,000 km) and took 401 days. Chojnowska-Liskiewicz was awarded the Commander’s Cross of the Order of Polonia Restituta and was selected Gdańsk’s Citizen of the Year for 1978. She wrote of her voyage in her book Pierwsza Dookoła Świata (First to Sail the World).

Krystyna Chojnowska-Liskiewicz was born on July 15, 1936, in Warsaw, Poland. After World War II, her family moved to a town in the vicinity of great lakes called Ostróda. There she had her first yachting experiences and remained fascinated by big ships. She studied ship construction engineering at the Gdańsk University of Technology and upon graduating began to design and construct ships. Chojnowska-Liskiewicz married Waclaw Liskiewicz, a university classmate who became head constructor at a yacht shipyard in Gdańsk.

Chojnowska-Liskiewicz sailed with an all-women crew from Poland to Scotland. She also sailed to the Gulf of Bothnia in the northern Baltic Sea with just one other person, which gave her a sense of what it would be like to care for a yacht on her own.

When the United Nations declared 1975 the International Women’s Year, the Polish Sailing Association aimed to promote Polish sailing by sending a woman on a solitary trip around the world. Krystyna Chojnowska-Liskiewicz was selected because of her experience. Her husband custom-designed and oversaw the construction of her yacht. The boat was named Mazurek after the traditional Polish music genre and was equipped with provisions, tools, a radiotelephone, maps, books, manuals, and a shotgun for protection.

The yacht was transported from Gdańsk to the Canary Islands, where it departed on March 10, 1976, at 2:00 pm. A malfunction of the autohelm forced her to turn back and delay her trip for 18 days. After a month at sea, she reached her first destination in Barbados. With her engine malfunctioning, she relied almost solely on her sails to reach Panama where it took five weeks to fix. After crossing the Panama Canal, she sailed into the Pacific Ocean heading to the Marquesas Islands for two months.

She devoted a day of the week to maintenance of different parts of the yacht to keep a routine and avoid boredom. She discussed technical and maritime issues with her husband over the radiotelephone every few days. She traveled to Tahiti, which she claimed was the most beautiful place in the world. Next on her route were Fiji and Australia. After a year apart, she got to see her husband in Sydney where they explored nearby cities and repaired the yacht. She held a press conference in Sydney that led to her becoming a topic of TV shows and gaining popularity.

She headed north from Sydney in May and navigated through the Great Barrier Reef, anchoring at night. By July, Chojnowska-Liskiewicz reached Portland Road where she was transported to a hospital because of kidney stones. Once she left the hospital, she found that her yacht had gone missing because an anchor had broken loose. Fortunately, it was recovered before any damage and she set out to Darwin to prepare for the next long journey across the Indian Ocean. She reached Mauritius then South Africa. The autohelm malfunctioned again and she decided to steer manually, only allowing her to sleep for two hours a day.