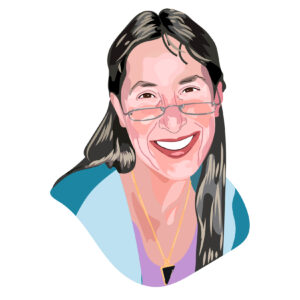 Judith Young was an American physicist, astronomer, and educator. She focused on galaxy formation and evolution, star formation, and interstellar matter. During her 15-year career, Young published over 130 papers. In 1986, she was the first person to be awarded the Maria Goeppert-Mayer Award from the American Physical Society, “For her studies of the structure of galaxies, and in particular for her extensive measurements of the Molecular distributions in these galaxies and their correlation with star information.“

Judith Rubin Young was born September 15, 1952, in Washington, D.C. Her mother, Vera Cooper Rubin, is known for her discoveries of dark matter and her theories for rotational curves. Young received her B.A. in Astronomy from Harvard and graduated with Honors. From there she attended the University of Minnesota earning her MS and PhD in Physics on “The Isotopic Composition of Cosmic Rays.”

In 1979, Young started her postdoctoral fellowship at the University of Massachusetts Five College Radio Observatory. Here she collaborated with Nick Z. Scoville. They measured the cold gas and carbon monoxide content of galaxies, since they are the materials from which stars form. They discovered, among other things, that the distribution of light and gas is proportional in galaxies. As the amount of gas that is present in the galaxies increases, the more stars are formed. In 1992, Young received the Annie Jump Cannon Award in Astronomy for distinguished contributions to astronomy.

Young was the first female astronomy faculty member at the University of Massachusetts. In 1985, she started as an assistant professor at the University of Massachusetts Amherst and went on to become a full professor in 1993. Young’s main research was extragalactic observations of star-forming molecular gas using CO lines and related observations of star formation tracers in blue light, H-alpha emission, and the infrared continuum.

In 1992, Young initiated the UMass Sunwheel Project, after a visit to Montana where she observed a similar structure erected by the Blackfeet indigenous people. The stone structure lined up in conjuncture with solstices and equinoxes. She began building the Sunwheel in 1997 with a ring of 2-foot-tall rocks. By 2000, she was able to install a ring of 8-10-foot-tall granite rocks, marking motions of the Sun and Moon. Young received the University’s Distinguished Academic Outreach Award. Over 15 years, thousands of visitors to UMass Amherst attended seasonal lectures presented by Young.

Judith Young passed away May 23, 2014, at the age of 61. She received many awards throughout her career, including the Annie Jump Cannon Prize (1982), the Maria Goeppert-Mayer Award (1986) of the American Astronomical Society and a Sloan Research Fellowship (1986-1989). In addition to her many publications, Young supervised 5 PhD students and 15 undergraduate research projects. Young’s collaborator, Scoville, wrote of her research: “Her pioneering galactic structure research included some of the earliest mapping of CO emission in galaxies followed by the most extensive surveys of molecular gas and star formation in nearby galaxies.”