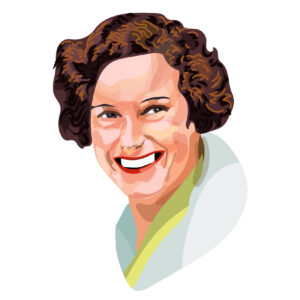 Jean Batten was a New Zealand aviator known for being the first person to fly solo from England to New Zealand in 1936. She broke several aviation records and was honored by many different countries and societies. Batten was the first female recipient of the Gold Air Medal of the Federation Aeronautique Internationale.

Jean Gardner Batten was born September 15, 1909, in Rotorua, New Zealand. Her parents separated in 1920 and Batten stayed with her mother while her father financed her education. In the late 1920s, Batten developed an interest in aviation that her mother encouraged. In 1929, Batten’s mother took her to Sydney, Australia and arranged for her to fly with Australian aviator Charles Kingsford Smith.  In 1930, Batten and her mother sailed to England where Batten began flight lessons at the London Aeroplane Club. By December, she earned her “A” license. In December 1932, she obtained her “B” license.

Batten attempted to break Amy Johnson’s England to Australia solo flight record of 19 ½ days. Her first two attempts in 1933 failed, but she continued on. In May 1934, she successfully broke the record, landing the Gipsy Moth in Darwin, Australia in 14 days. She and her traveling companion, a small, black kitten named Buddy, garnered a lot of media attention for the accomplishment. Buddy was a gift, “for luck,” from a group of ex-servicemen that she met at the Prince of Wales Military Hospital in Sydney, Australia.

In November 1935, she became the first woman to fly across the South Atlantic. She flew the 1,900 mi (3,000 km) trip in a Percival Gull 6. She won the Royal Aero Club’s Britannia Trophy. In 1935, Batten was jointly awarded the Harmon International Trophy for the most outstanding flight by a woman with Amelia Earhart. She also won it outright in 1936 and 1937.

In October 1936, she made the first direct flight from England to New Zealand using only a compass, maps, and a watch. She landed in Auckland eleven days and forty-five minutes after her departure. She and her plane, Batten’s Gull, arrived at the Mangere Aerodome where she was greeted by a crowd of 6,000 people including the mayor and her father. The event was broadcast live over the radio in a series of recordings that are held as part of the RNZ Historic Collection today. After the flight, she was honored by many, even being given a chief’s kahu huruhuru and conferred with the title “Hine-o-te-Rangi” (daughter of the skies) by the local Maori.

She ended her tour of New Zealand to rest before completing her last long-distance flight from Australia to England in October of 1937. The flight was completed in five days and eighteen hours, a solo record for pilots of either sex, and through that accomplishment, she became the first person to simultaneously hold England-Australia records in both directions.

At the start of World War II, being a woman, Batten was no longer allowed to fly. During the war she gave lectures to raise money for the war effort and spent time on an assembly line for a munition’s factory. Batten continued to travel with her mother until she died in Spain in 1966. Three years later, Batten reentered public life and traveled the world for ten years before deciding to relocate her permanent residence to Majorca, Spain.

Jean Gardner Batten died in Majorca, Spain on November 22, 1982, at age 73. Posthumously, many schools and streets were named in her honor. A terminal in the Auckland airport is named after her, there is a bronze sculpture of Batten in the Rotorua Regional Airport, as well as many other tributes. Batten also wrote and published three books including My Life and Alone in the Sky.