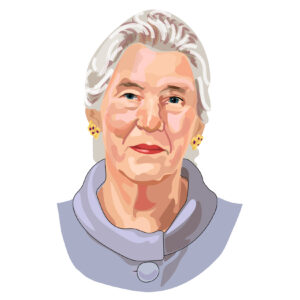 Janet Davison Rowley was an American human geneticist and the first scientist to identify a chromosomal translocation as the cause of leukemia and other cancers, which proved that cancer is a genetic disease. Rowley spent the majority of her life working in Chicago and received many awards and honors recognizing her achievements and contributions in the area of genetics.

Janet Rowley was born April 5, 1925, in New York City. At the age of 15 she received a scholarship to the University of Chicago Laboratory Schools where she completed high school as well as her first two years of college. By the age of 23, she received bachelor degrees in philosophy and science in addition to a doctor of medical degree, all from the University of Chicago.

In 1951, Rowley got her medical license and worked as attending physician at the Infant and Prenatal Clinics in the Department of Public Health, Montgomery County, Maryland. In 1955, she started researching at a clinic in Chicago for children with developmental disabilities as well as teaching neurology at the University of Illinois School of Medicine. In 1962, while at Oxford, Rowley studied cytogenetics, learning about chromosomes and the cellular aspects of heredity.

A year later, she joined the hematology department at University of Chicago as a research associate. Here she made many discoveries, including that the Philadelphia chromosome was not a chromosome deletion, but a translocation (an exchange) of segments between chromosome 9 and 22. Rowley uncovered more than a dozen similar translocations in other leukemia and lymphoma cells.

In 1977, Rowley became a full professor at the University of Chicago. In 1984, the University of Chicago named Rowley the Blum-Riese distinguished service professor of medicine, molecular genetics and cell biology, and human genetics. Her discoveries opened the door to the creation of cancer-specific drugs and treatments creating a model for cancer research still followed today.

Mary-Claire King, a professor of genetics and medicine at the University of Washington and president of the American Society of Human Genetics said Rowley’s work helped establish cancer as a genetic disease. “She demonstrated that mutations in critical genes lead to specific forms of leukemia and lymphoma, and that one can determine the form of cancer present in a patient directly from the genetic changes in the cancer. We are still working from her paradigm.”

Janet Davison Rowley passed away December 17, 2013, at age 88. Rowley published over four hundred articles during her tenure at the University of Chicago. She received many awards throughout her career, including both the 1989 Charles S. Mott Prize by the General Motors Cancer Research Foundation, and the Clowes Memorial Award. In 1998, Rowley was one of three scientists to receive the Lasker Award, given for distinguished contributions to medical science. The American Society of Hematologists awarded her three of its highest awards: the William Dameshek Prize in 1982, the Henry M. Stratton Medal in 2003, and the Ernest Beutler Lecture and Prize in 2011.