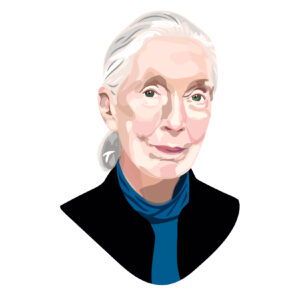 Dr. Jane Goodall is an English primatologist and anthropologist. Her long-term study of wild chimpanzees in Tanzania is the world’s longest running continuous wildlife research project and has changed what the world knows about chimpanzees. Her discoveries and conservation efforts have been recognized through her many honors and she has been named a United Nations Messenger of Peace. Today, the Jane Goodall Institute continues to advocate for ecological preservation.

Valerie Jane Morris-Goodall was born on April 3, 1934, in London. When Goodall was a year old, her father gifted her a chimpanzee stuffed toy, which she named Jubilee and carried everywhere. Animal behavior fascinated Goodall as a child and she spent her time meticulously observing and learning about wildlife. At an early age, Goodall dreamed of going to Africa to study exotic animals in their natural habitat. She read books like Doctor Doolittle, The Jungle Book, and Tarzan and formed a nature club with her sister and friends called the Alligator club. Her parents divorced after World War II and Goodall was raised by her mother who was always supportive of her dreams to be with animals.

When she was 19, Goodall enrolled at London’s Queens Secretarial College and later held clerical jobs at Oxford University. When her friend Clo Mange invited her to her family’s farm in Kenya, she quit her job in London, moved back home, and worked as a waitress to save enough money for the boat fare. In March 1957, Goodall embarked on a three-week journey by ship to Africa. She began an office job in Nairobi where she met paleontologist Louis Leakey who was the curator of Nairobi’s natural history museum. Her enthusiasm and knowledge of natural history impressed Leakey and he asked her to be his assistant. Goodall traveled with Leakey and his wife, archaeologist Mary Leakey, on a fossil expedition to Tanzania.

Leakey selected Goodall to research chimpanzee behavior. He did not want an academic with preconceptions. On July 14, 1960, twenty-six-year-old Goodall began studying wild chimpanzees at the Gombe Stream Chimpanzee Reserve in Tanzania. Her mother, Vanne, joined her for the first few months. Goodall gave the chimpanzees names, which was an unusual practice for a scientific study.

The chimpanzees ran away from her for the first few months but eventually, one male, David Greybeard, began to accept her and the others eventually followed. David Greybeard, Goodall’s favorite, was also the first chimpanzee that she observed utilizing grass or twigs as tools to pull termites out of termite mounds. Another significant finding was that chimpanzees are omnivores, not herbivores as previously assumed. She recorded them showing affection and developing bonds. Goodall also discovered that male chimps patrol territorial borders and will attack solitary males from another tribe.

National Geographic began sponsoring Goodall’s work and she began creating articles, books, and a television documentary series. Without first obtaining a bachelor’s, Leakey arranged for Goodall to go straight into a PhD program at the University of Cambridge. Here Goodall had to defend the idea that chimpanzees have emotions, minds and personalities. Some criticized her for giving the chimpanzees names. “It would have been more scientific to give them numbers.” Goodall completed her thesis in 1965 on the Behaviour of free-living chimpanzees.

The Jane Goodall Institute was officially founded 1977. Their mission is to advance the power of individuals to improve the environment for all living things. In 1991, Goodall and Tanzania students founded Roots and Shoots. This program harnesses the spirit and enthusiasm of young people to develop creative solutions to environmental issues. There are over 6000 groups around the world in over 97 countries. She continues to travel and lecture throughout the world, inspiring audiences to recognize their personal power and responsibility. Goodall has received many honors for her work and in April 2002, she was named a UN Messenger of Peace.