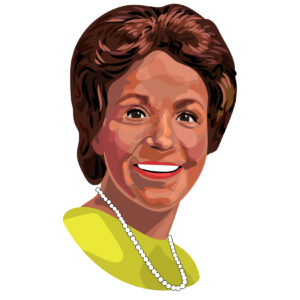 Born in New York City on November 20, 1919, Jane Cooke Wright was the eldest daughter of Louis T. Wright, the first African American graduate of Harvard Medical School, and Corinne Cooke, a public-school teacher. With a family history of achievement in the medical field, Wright graduated with honors from New York Medical College in 1945 before completing her internship at Bellevue Hospital (1945-1946) and Harlem Hospital (1947-1948). In 1947, she married Harvard Law graduate David Jones Jr. with whom she had two daughters.

After spending six months as a staff physician with the New York City Public Schools, Dr. Wright joined her father, founder of the Cancer Research Foundation at Harlem Hospital in 1949. Together, they investigated anti-cancer chemical testing, for the first time: chemicals on human leukemias and other lymphatic system cancers. While other research used mice tumors, Dr. Wright’s team cultured patient-tumor tissue, forming the idea of personalized medicine based on individual patients. In 1951, she identified the drug methotrexate as effective against cancerous tumors, thus establishing chemotherapy as a viable treatment for cancer.

At the age of 33, following the death of her father, Dr. Wright was appointed head of the Cancer Research Foundation. In 1955, she became an associate professor of surgical research and the director of cancer chemotherapy research at New York University Medical Center and its affiliated hospitals. Dr. Wright not only implemented a new comprehensive program to study stroke, heart disease, and cancer but created another to instruct doctors in chemotherapy. By 1967, Dr. Wright was the head of the Cancer Chemotherapy Department and associate dean at New York College. In a field dominated by white men, Dr. Wright was the only African-American woman in a high-ranking position at a nationally recognized medical institution.

In addition to research, Dr. Wright was the only woman to help found the American Society of Clinical Oncology in 1964 and became the first woman elected president of the New York Cancer Society in 1971. President Lyndon Johnson appointed her to the National Cancer Advisory Board and the President’s Commission on Heart Disease, Cancer, and Stroke. Internationally, Dr. Wright led delegations of oncologists across China, the Soviet Union, Africa, and Eastern Europe and served as vice president of the African Research and Medical Foundation between 1973-1984.

With multiple awards and recognitions, Dr. Wright retired in 1985 and was appointed emerita professor at New York Medical College in 1987. On February 19, 2013, Dr. Jane Cooke Wright, died at the age of 93. In honor of her pioneering spirit, the ASCO annually awards an early-career researcher with the Jane C. Wright, MD, Young Investigator Award, a grant to spearhead cancer research. Her legacy lives in her words, “There’s lots of fun in exploring the unknown. There’s no greater thrill than in having an experiment turn out in such a way that you make a positive contribution.”