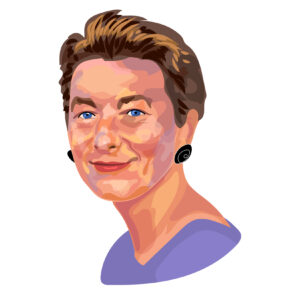 Over the course of her career Honor Frost led the establishment of underwater archaeology as a productive field of research. Her many underwater expeditions in diverse locales such as Egypt, Turkey, and Italy altered understandings of ancient maritime history. Frost’s work pioneered the study of stone anchors left along the ocean’s floor and demonstrated that these commonly found items could be used to recreate ancient trade routes.

Frost was born in Nicosia, Cyprus on October 28, 1917, where she spent much of her childhood by the sea. She grew up under the legal guardianship of Wilfred Evill since she lost both of her parents. Throughout the 1930s and 1940s Frost focused her attention on art and ballet. She was a designer for the Ballet Rambert and the director of publications for the Tate Gallery.

Just after World War II Frost had a chance encounter with exploration and diving at a party. She donned a military shallow water diving suit to explore a 17th century well. From that point forward Frost was fascinated by the possibilities of underwater exploration. In the early 1950s, she began training with the Club Alpin Sous-Marin in Cannes where she did her first wreck dive with French archeologist Frédéric Dumas. In 1955 she investigated underwater ruins in Crete with the British School of Athens. In 1957, Frost joined Kathleen Keyon, a British archeologist, on a formal land-based expedition in Jericho, Israel as a draftsman. Here she created detailed diagrams of underground Bronze Age tombs.

After these initial forays Frost participated in many historically significant expeditions. During a 1959 expedition in Turkey Frost recognized that a Bronze Age shipwreck had been misclassified as Mycenean when it was, in fact, Phoenician. This provided evidence that Phoenicians had been trading far earlier than previously assumed and proved to be the oldest shipwreck ever discovered to that date. In the summer of 1960 Frost participated in the first dive using systemic excavation techniques to further study the Bronze aged ship off the coast of Turkey. Throughout the 1960s she worked at diverse sites in Lebanon, Syria, the Levantine Coast, Tyre, and Sidon. During a 1968 expedition to the Port of Alexandria sponsored by UNESCO, Frost identified the lost palace of Alexander and the Ptolemies. In the late 1960s Frost excavated a Roman ship. In 1971 the Italian government called on Frost to do work off the coast of Sicily. In this work Frost identified and diagrammed ancient vessels used by Carthage in the First Punic War.

Frost also dedicated herself to advancing the field of underwater and marine archaeology. She contributed regularly to scholarly journals on nautical research and strove to further cooperation between nations and organizations in underwater research. She helped to found the Council for Nautical Archaeology, and a related journal, The International Journal of Nautical Archaeology. In her lifetime Frost was honored several times for her efforts. In 1969 she was made a fellow at the Society of Antiquaries. In 1997 the government of France awarded her a medal for her work in Egypt and in 2005 the British Sub-Aqua Club recognized Frost for her work in furthering international cooperation in the field of underwater archaeology.

Honor Frost died on September 12, 2010. Her art collections were used to endow the Honor Frost Foundation. The Foundation continues Frost’s legacy by providing funds for research projects in underwater archaeology.