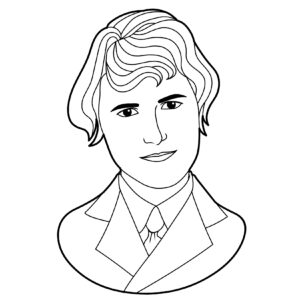 Herma Albertson Baggley was a botanist, educator, and author who worked for the U.S. National Parks Service (NPS). Baggley was the first female Junior Park Naturalist in the NPS and worked on the NPS Mission 66 program that is credited with thousands of miles of new roads and new facilities, including new visitor centers to improve and modernize the parks.

Baggley was born in Inwood, Iowa on October 11, 1896. In 1915, she graduated from high school in Blackfoot, Idaho and then taught elementary school for the Blackfoot School District for a few years. She then attended the University of Idaho and in 1921, she received her bachelor’s degree in botany with a minor in philosophy.

After graduation, Baggley took a position as a seasonal naturalist at Yellowstone National Park. She also worked at the Old Faithful Lodge as a “pillow puncher,” or maid, to earn room and board. Baggley helped create the first nature trail at Old Faithful. She also lectured in the Old Faithful Lodge and in the open-air amphitheater on the Firehole River. Baggley kept a display of wild flowers in both the Lodge and Old Faithful Inn. After the summer season was over, she was offered a permanent position and accepted.

Baggley stayed at the Old Faithful Geyser for three years where she was a guide and lecturer. She then transferred to Mammoth Hot Springs and due to an injury worked in the Mammoth Museum and Information Office. Yellowstone was only open in the summer, so Baggley taught high school science during the offseason. She was offered a graduate fellowship in the botany department at the University of Idaho and in 1929, Baggley received her Master’s degree in botany. She then began teaching in the botany department as a full-time instructor.

In 1931, Baggley took a full-time job as an Assistant Park Naturalist and in May 1931 she became the first female Junior Park Naturalist in the NPS. She worked as guide, lecturer, and museum worker. Baggley authored or illustrated more than 22 articles for NPS publications, during her seven years as a park naturalist.

In 1936, Baggley collaborated with Walter Byron McDougall, a plant ecologist, on Plants of Yellowstone National Park. This guide for visitors and researchers is still reliable today. In 1952, she became a leader with the National Park Women’s Organization, and worked with the NPS on the Mission 66 program. Starting in 1956, this 10-year plan was put into place to repair and modernize park infrastructure.