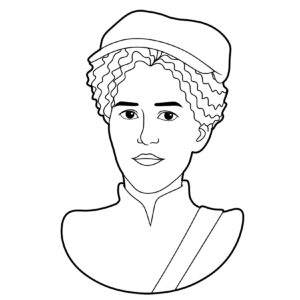 Hallie Morse Daggett was the first woman hired as a fire lookout by the United States Forest Service. A fire lookout’s job is to look for fire from a lookout tower. Fire lookout towers are typically in remote areas on high elevation allowing a clear view of the surrounding area in order to see smoke caused by a wildfire. In 1913, Daggett started at the Eddy Gulch Lookout Station in the Klamath National Forest and continued there for 14 seasons.

Daggett was born in 1878 in Etna, California. Her father, John Daggett, was an owner of the Black Bear Mine and a politician. Daggett and her sister completed courses in girls’ seminaries in Alameda and San Francisco. During their childhood, they, along with their brother, explored the Siskiyou Mountains, a coastal subrange of the Klamath Mountains.

In 1913, Daggett applied to be a fire lookout at the Eddy Gulch Lookout Station. Daggett was up against two men for the position, but Ranger M.H. McCarthy wrote to his supervisor and recommended her: “This most untiring and enthusiastic applicant is Miss Hallie Daggett, a wide-awake woman of 30 years who knows and has traveled every trail in the Salmon watershed. She is not afraid of anything that walks, creeps or flies.” The appointment papers went through on May 26, 1913, making Daggett the first female fire lookout hired by the United States Forest Service.

During her first season, Daggett reported around 40 fires. Of these fires, fewer than five acres were burned and Daggett was praised by Ranger M.H. McCarthy, the man who hired her. McCarthy wrote, “due entirely to the fact that rangers and guards had such prompt warning that suppressive efforts were put forth before the fires could gain an appreciable headway. Had one less faithful been on the Lookout, it might easily have been five thousand. The first woman guardian of the National Forests is one, big, glorious success.”

Daggett continued on for 14 more seasons. Each season was about 4-7 months per year and she was given 2 days off each month. “With this respite, the work never grows monotonous. My interest is kept up by the feeling of doing something for my country—for the protection and conservation of these great forests is truly a pressing need. To women who love the ballroom and the glitter of city life, this work would never appeal, but to me it is work more than useful—it is a grand and glorious vacation-outing, for the very lifeblood of these great foliated mountains surges through my veins. I like it; I love it! And that’s why I’m here.”

Hallie Morse Daggett retired in 1927 and stayed in her home 10 miles (16 km) from Eddy Gulch. In her later years, she built a cabin in her hometown, Etna, California, where she lived from 1950 until her death in 1964. The Hallie Daggett cabin has been restored and relocated to the Etna City Park in Etna.