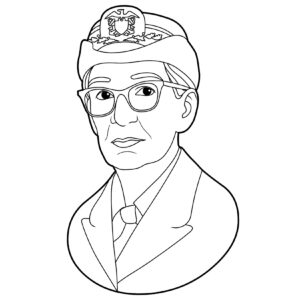 Over the course of her life, computer science pioneer, professor, and Navy Rear Admiral Grace Brewster Murray Hopper became one of the most accomplished programers of the twentieth century. Her contributions to the computer science field include developing one of the first link editors and promoting the idea of machine-independent programing languages.

Grace Brewster Murray was born on December 9, 1906, in New York City. As a child, Hopper was known to be curious and made a habit of dismantling alarm clocks to understand the engineering. At seventeen, Hopper applied to Vassar, where she studied mathematics and physics and graduated Phi Beta Kappa. In 1930, Hopper obtained a PhD in mathematics from Yale University before returning to Vassar to teach mathematics. She was later promoted to associate professor in 1941.

At the age of 34, Hopper attempted to enlist in the United States Navy during World War II. Though she was initially denied due to the importance of her teaching position at Vassar, she took a leave of absence and was sworn into the United States Navy Reserves in 1943. The following year, she graduated from the Naval Reserve Midshipmen’s School first in her class and was assigned to the Bureau of Ships Computation Project at Harvard. She served on the Mark I computer programming staff for five years and published three papers that detailed her time with the programing team.

In 1949, Hopper joined Eckert-Mauchly as a senior mathematician and joined the development team for UNIVAC, the first large scale electronic computer to emerge on the market in 1950. She introduced the idea of developing a new program that would utilize the English language. Hopper began developing her new program with Remington Rand in the mid-1950s. In 1959, she participated in the Conference on Data Systems Languages, and served as a technical consultant and worked with many of her former employees to develop a new language program, Common Business-Oriented Language (COBOL). The program was later standardized in the late 60s and 70s for military use by Hopper, who was serving as the director of Navy Programming Languages.

After 42 years with the United States Navy and a number of promotions, Hopper retired at the age of 79. One of the few female Admirals in the Navy, Hopper was awarded the Defense Distinguished Service Medal, the highest non-combat decoration awarded by the Department of Defense, at her retirement ceremony.

Grace Brewster Murray Hopper died on January 1, 1992, at the age of 85. Following her death, she has received a number of posthumous awards and honors including being inducted into the National Women’s Hall of Fame in 1994 and being awarded the Presidential Medal of Freedom, the United States’ highest civilian honor, for her accomplishments in and contributions to the computer science field. Hopper’s legacy additionally inspired the creation of the Grace Hopper Celebration of Women in Computing, an annual conference designed to bring research and career opportunities to women in the computer science field.