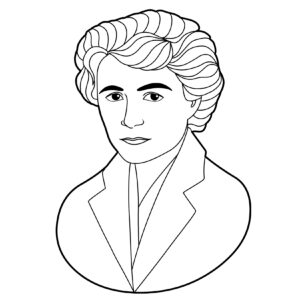 Gerty Theresa Cori was a biochemist who is most recognized for her work on the discovery of the Cori Cycle. The Cori Cycle explains the mechanism by which glycogen is broken down in muscle tissue into lactic acid and then resynthesized in the body and stored as a source of energy. In 1947, Cori was the third woman in history to receive the Nobel Prize in science and the first woman to receive the Nobel Prize in Physiology or Medicine for her work in discovering and explaining this cycle.

Gerty Theresa Radnitz was born on August 15, 1896, in Prague. Cori was introduced to science and medicine early on in life by her father who was an accomplished chemist. She was tutored by her father before enrolling in formal classes. At 16, Cori decided that she would become a medical doctor. She continued teaching herself Latin, science, and mathematics before being accepted into the Karl-Ferdinands-Universität in 1914.

Cori graduated from medical school in 1920 and began her medical career in the pediatric unit at Carolinen Children’s Hospital in Vienna, Austria. During her time at the hospital, Cori researched blood disorders and temperature regulation. After serving in the Austrian military, Cori relocated to the United States and began working at the State Institute for the Study of Malignant Diseases in 1922. During her time at the institute, Cori worked on many collaborative studies and research papers; she published 11 articles as the sole author.

In 1931, Cori became a research associate at Washington University in St. Louis, Missouri. She was denied a position as a professor, since at the time, it was almost unheard of for a woman to hold such a position. However, Cori was eventually promoted to an associate professor position in 1943 and again to a professor in 1947, just months before winning the Nobel Prize. It was awarded to her and her husband, Carl Ferdinand Cori, “for their discovery of the course of the catalytic conversion of glycogen” along with Bernardo Alberto Houssay “for his discovery of the part played by the hormone of the anterior pituitary lobe in the metabolism of sugar.”

In addition to winning the Nobel Prize, Cori was also the recipient of the Midwest Award, the Squibb Award in Endocrinology, the Garvan-Olin Medal, the Sugar Research Prize, and the Borden Award. Cori was a member of multiple organizations including the American Academy of Arts and Sciences, American Society of Biological Chemists, the American Chemical Society, and the American Philosophical Society. She also held a position as a board member for the National Science Foundation.

In her later years, Cori became ill with myelosclerosis, a condition that is thought to have been exacerbated by her work with X-rays. Gerty Theresa Cori passed away in 1957, but her work has continued to be honored after her passing. In 1998, she was inducted into the National Women’s Hall of Fame. Ten years later, in 2008, the U.S. Postal Service released a stamp featuring Gerty Cori.