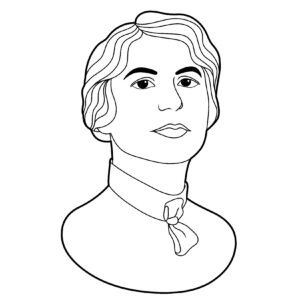 Gertrude Blanch was a Polish born American mathematician who was the mathematical leader for the Mathematical Tables Project, a U.S. computing organization that tabulated higher mathematical functions before the invention of the digital electronic computer. Blanch was a pioneer in algorithm design for both human and mechanical computers. She was the assistant director and leader of the Numerical Analysis at UCLA computing division and was head of mathematical research for the Aerospace Research Laboratory at Wright-Patterson Air Force Base in Dayton, Ohio.

Gittel Kaimowitz was born in Poland on February 2, 1897. She moved to the United States at the age of 10. She attended Eastern District High School in Brooklyn. After she graduated her father died, so Blanch took a job to support her family as a clerk. She saved money to take evening classes at Washington Square College, part of New York University (NYU). In 1932, Blanch received her degree in Mathematics with a minor in Physics from NYU. That same year, she changed her name from Kaimowitz to Blanch, an Americanized version of her mother’s name Blanc. In 1935, she received her PhD from Cornell University in algebraic geometry.

In 1938, she began work on the Mathematical Tables Project, for which she was the Director of Mathematics in charge of 450 human computers. The project started in the United States as a part of the Works Progress Administration (WPA) and employed clerks to calculate complex mathematical tables for scientific, engineering, and military work. Blanch designed algorithms to make the calculation process more efficient and is known as a pioneer. At the start of World War II, they were taken over by the National Bureau of Standards. Blanch oversaw calculations in scientific research for the U.S. Army, Navy, the Manhattan Project, and other institutions.

In 1948 she moved to California and started working for the Institute of Numerical Analysis. Blanch became the head of mathematical research for the Wright-Patterson Air Force Base in Dayton, Ohio. She published over 30 papers and became an early member of the Association of Computing Machinery. Some of her research included finding ways to compensate for mathematical deficiencies in computers designed for industry. She was one of the three women to attend the 1948 IBM Scientific Computation Forum, where they discussed methods for solving scientific problems using IBM punched card equipment. She stood at the intersection between theory and practicality at a tipping point in the history of mathematics.

Blanch worked at the Dayton Air Force Base till the age of 69. She retired to San Diego, but continued researching throughout her life. In 1962 Gertrude Blanch was elected as a Fellow in the American Association for the Advancement of Science and in 1964 she received the Federal Woman’s Award, an award for women who provided extraordinary services to the U.S. Government.

Gertrude Blanch died on January 1, 1996, at age 99. She was inducted into the Portrait Gallery at the National Institution of Standards and Technology in 2017. The author of When Computers Were Human, David Alan Grier, wrote, “Gertrude Blanch can be viewed as either the last and most important leader of human computers or one of the first numerical analysts for electronic computers.”